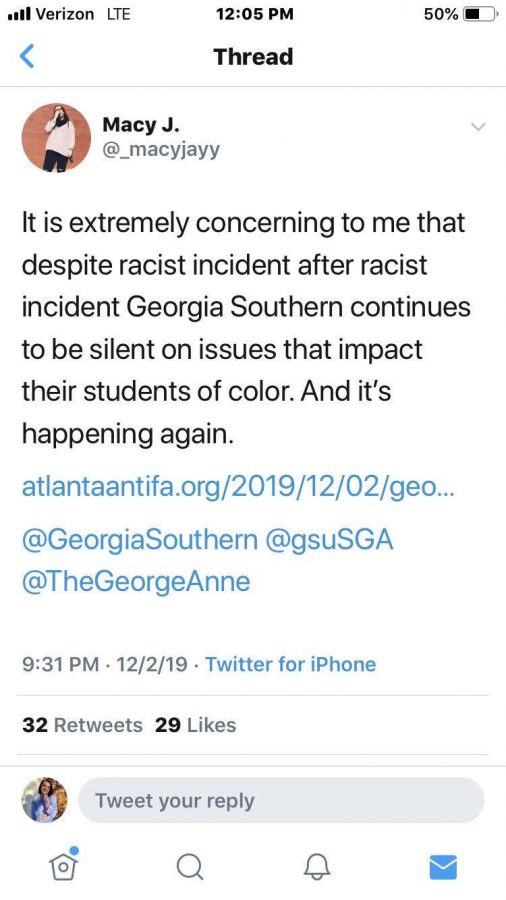 STATESBORO — A Georgia Southern student’s presentation against replacement migration has reached 92,000 views as of Tuesday.

Charles Robertson promoted the idea of replacement migration, which according to him is a policy to encourage immigration in order to help with population declines.

“And this is where y’all are gonna start to hate me,” Robertson said. “‘Diversity is our strength’ is a bare faced lie. You should know this… Having them here at all damages virtually all measures of civic health. This policy is on its face, stupid.”

Many of the students responded with confusion in the video.

Robertson has over 3,900 subscribers on YouTube and the video has over three thousand comments. Many of the comments were positive and filled with encouragement for Robertson to keep going with this argument.

“I don’t care if you call me racist,” Robertson said. “You’re just trying to attack the character of the person making the argument, rather than the argument itself.”

Many students responded online with disappointment towards the presentation, citing that there were racist undertones. With the book burning incident just occurring in October, some believed that the University should take action.

Matt Mayer, senior sports management major, feels that the school’s lack of action against racial injustice has become a pattern. He explains that he transferred to GS two years ago and has seen at least one racial driven incident a semester since then.

“If there [are] no repercussions for their actions then they will keep doing it, it’s simple,” Mayer said. “It’s like…if you’re a child and you do something you’re not suppose to, you get punished for it, right? Then, in the future you know not to do it again.”

Since the video has gone viral online, SGA has encouraged students through social media to attend President Kyle Marrero’s “Courageous Conversations” forum on Wednesday at 6 p.m. in the Russell Union ballroom.

The University has not yet responded to the George-Anne’s request for comment on this specific incident, but President Marrero has stated multiple times that the administration is making an effort to be more inclusive and diverse through forums and diversity boards. The University sent out an email to all GS students, faculty and staff on Tuesday after a faculty senate meeting the night before.

“Inclusive Excellence is a strategic pillar and a core value at Georgia Southern University,” the email reads. “Inclusive excellence speaks to sustaining a campus climate that honors, respects, and is inclusive of all elements of diversity that makes each of us unique: culture, race, ethnicity, color, national origin, sex, age, (dis)ability, creed, religious or spiritual beliefs, sexual orientation, socio-economic status, class, gender identify, gender expression, veteran status, political philosophy, etc. We uphold that all of our individual differences enrich our university.”

Comments on the video and tweets on the subject can be viewed above.