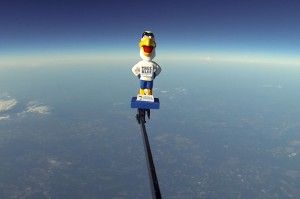 Georgia Southern University’s mascot has landed safely after being launched into the stratosphere, according to a news release.

GUS was attached to a weather balloon and a rig with multiple video cameras and tracking equipment.

The rig lifted off at Allen E. Paulson Stadium, reached an altitude of 102,000 feet before the weather balloon burst and a parachute returned GUS to land near Mount Vernon, Ga.

The goal of the project was to showcase the university’s efforts in Science, Technology, Engineering and Math (STEM) education.

The project included the Center for Academic Technology Support and several faculty and staff members, as well as two students, Cameron Cato and Jeremy Goodman.

“It was quite impressive that what we made could go up more than one hundred thousand feet and survive the extreme cold of ninety-five degrees below zero,” Cato said in the news release. “All the electronics came through in great shape and were working fine when we recovered GUS.”

Goodman was ecstatic about the results of their project.

“The cameras captured some amazing video which shows the curvature of the earth and should help promote STEM education,” Goodman said in the news release. “This is an exciting experience. How many people can say they put something into near space?”

Charles Patterson, vice president for Research and Economic Development said in the news release that the project hopes to get more children interested in STEM careers by being able to show the science behind something entertaining and fun.

University President Brooks A. Keel, Ph.D., said, “This was a great experiment for our University to blend the wow factor with real science, technology, engineering and math and give our students an opportunity to put textbook material into a real-life situation for a great learning experience.”