The Haunted Forest to shock and scare 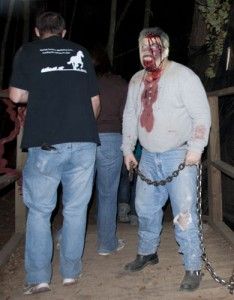 Georgia Southern University students are in for a shock and thrill at this year’s Haunted Forest on Malecki Drive.

The Haunted Forest contained many scares and thrills ranging from clowns to corpse bride and to keep with tradition, there were men with chainsaws.

“I was grossed out and freaked out when they were throwing spaghetti at me, and I just wanted to get away from the chainsaw guy,” sophomore undeclared major Jenna Cicci said. “I honestly didn’t see much because I had my hand covering my eyes most of the time.”

For some students, this was their first trip to GSU’s Haunted Forest, and they were not sure what to expect.

“I didn’t think it was going to be as scary as it was. Just expect the unexpected. When you think it’s over, it’s not. And go with a group,” junior middle grades education major Banecia Baker said.

Haunted Forest attendees reacted differently and were scared by various characters in the forest.

“There was a pair of big guys. One was about three hundred pounds. I scared them so bad that one was rolling on the ground just yelling, ‘go away go away’ and the other was hiding his head under a towel he had with him,” Haunted Forest employee Koko the Clown said.

Koko the Clown has worked at the Haunted Forest for four years and had advice to give to future attendees.

The Haunted Forest employees are encouraged to stay in character through the duration of this event.