Swimming and diving season begins with a split for Eagles 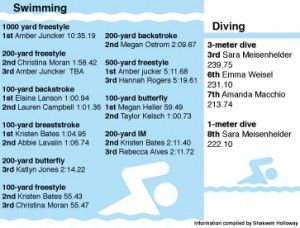 The Georgia Southern University swim team took home its first win against Limestone College and the Savannah College of Art and Design, while the team was handed losses against Clemson University and Eastern Carolina University.

The Eagles took the first win of the day in the Women 200 Yard Medley Relay, taking a time of 1:49.52. Their other relay squad, who took second place with a time of 1:51.95, closely followed them.

The next event for the Eagles was the 100-yard backstroke where junior Elaina Lanson took the top spot with a time 1:00.94 followed closely by her teammate sophomore Lauren Campbell, 1:00.36. Shortly after, senior Kristin Bates and junior Abbie Lavallin got a one-two finish in the 100-yard breaststroke.

GSU struggled to grab the top spot in the 200-yard butterfly but managed to finish with swimmers in third, fourth, and fifth place. Later, they had a similar performance in the 100-yard freestyle placing second, third, and fourth.

Another notable performance came from junior Megan Heller winning the 100-yard butterfly. Bates and Alves stepped up to take second and third in the 200-yard IM.

Once the final scores were tallied, GSU was named the victor of the meet, 175-76.

Also on Saturday the diving squad competed against Clemson University and University of Richmond in Clemson, S.C.  The first event of the day was the three-meter, in which Eagle senior Sara Meisenhelder placed third with a score of 239.75. Sophomore Emma Weisel placed sixth while senior Amanda Macchio came in seventh.

The final event of the day was the one-meter dive. It was dominated by Clemson, which took the top six spots in the final tallies. Meisenhelder finished with the highest score for the Eagles, scoring a 222.10 and placing eighth, followed by Macchio in 10th and junior Brittany Swanson finished 12th.

At the end of the day Richmond and Clemson bested GSU in the final scoring marks.

The Eagles will travel to Charleston, S.C. on Nov. 9 for their second meet of the year. They will compete against the College of Charleston and Eastern Carolina University.