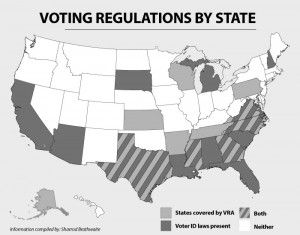 Multiple states are changing their voting standards as state assemblies across the nation pass bill upon bill, demanding changes to voting procedures.

The most publicized example of the new voter ID laws is North Carolina’s Voter Identification Verification Act (VIVA), which increases the strictness of voter identification requirements and adjusts the voting practices of N.C. in ways that seem bent on making it more difficult.

For the time being, Georgia’s state congress has not made motions to pass a law of VIVA’s scope. However, the state does already have voter identification requirements in place.

The likelihood of further voter identification laws being passed in Georgia is unknown, but there are steps a student can take to ensure that his or her right to vote is protected.

Students who are registered voters of Statesboro can vote early to elect the next mayor of Statesboro from Oct. 14 – Nov. 1. Election Day is Nov. 5, according to the Bulloch County website.

“Members of the SGA and other student organizations, to the extent that they are more informed about politics and more committed to participating in politics, should be doing all they can to facilitate student voting,” Pirro said.

Bills have passed in the wake of the Supreme Court’s decision to annul Section 4 of the Voting Rights Act (VRA), which helped to force states with histories of voter discrimination to have all voting bills approved by the Department of Justice (DOJ).

The argument for the use of such mandates is that the bill is in place to prevent voter impersonation, or voter fraud.

However, evidence calling for such measures has not been found.

While VIVA and its fellow voter ID bills may actually be innocent in intent, questions are most definitely raised about their effects.

Jeffery Crowther, political science professor at GSU, believes the necessity of such voting acts is in doubt.

“That means the Voting Rights Act worked,” Crowther said. “In which case, there is no need to fix it.”