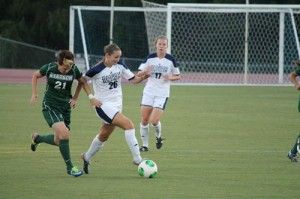 It was intense rivalry match up for the Georgia Southern University women’s soccer team as it was defeated by Southern Conference opponent Appalachian State University 3-1.

The Eagle offense found its stride this game, taking 17 shots. Senior forward Alex  Murphy managed to get off two shots and scored on one.

The defense held for most of the night but when Appalachian State found an opportunity they made it count, scoring two goals in the first fifteen minutes.

Murphy has hope for her team moving forward. She said, “(We need to) combine completely as a team, we are working together and working hard to get there.”

GSU has another chance to get a second conference win on Sunday when they play University of Western Carolina (5-4-1, 0-2 Southern Conference) at 2pm on Eagle Field.