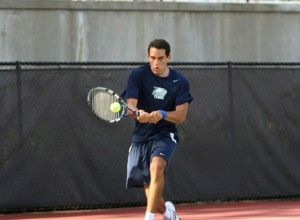 The Georgia Southern University men’s tennis team traveled to Atlanta to compete in the Intercollegiate Tennis Association Southeast Regional Tournament hosted by the Georgia Institute of Technology, taking place over the four-day weekend.

There were a  total of 17 schools with players in the main draw and the scoring for the tournament would be an eight-game pro set for doubles with a tie breaker of seven all and best two of three sets in singles play.

“This is all the best from our region, so there are no easy matches,” head coach Nick Zieziula said in a news release.

“We changed up our doubles teams a little bit for this weekend, so we’ve spent some time trying to make those adjustments and get comfortable,” Zieziula said in a news release.

Webb and Racy partnered up for doubles play as well as Codina Sala and Osorio.

While the Eagles did bring home a few wins, the biggest came from Osorio when he defeated Georgia State University senior Thomas Cook, with a score of 5-7, 6-2, 6-2 in the singles consolation draw. After his win, Osorio was able to move on to the next round, but was then overcome by University of Florida sophomore Gordon Watson 6-1, 6-1.

The rest of team was able to bring home three more wins from the tournament.

The first win was due to a default in a doubles match with Webb and Racy. The second win was in a singles match between Codina Sala and Mercer University sophomore Arsav Mohanty. Codina Sala recorded another victory when his match against University of Miami senior Omar Aly was defaulted.

Unfortunately, the Eagles were not able to secure more wins any further into the tournament, however there were some strongly-played matches. Kennesaw State University sophomore Tobi Menhofer battled Webb for a win during their singles match with the final score of 7-6, 6-7, 6-2.

Osorio also put up a good fight against University of South Florida freshman Paul Polarczyk, nearly defeating him, but ended up falling short with a score of 6-4, 6-7 (3-7), 6-3.

In the end, the Eagles just could not seem to find their stride when Central Florida University senior Matthew Gladstone d efeated Racy (6-1, 6-4) and Webb was knocked off by Georgia Tech sophomore Nathan Rakitt (6-1, 6-2).

“We played some very good tennis at times, but it wasn’t consistent enough to earn the games we needed at the end of sets,” Zieziula said in a news release. “We fought hard in our matches, but when you are at this level competing against the best in the country, no one is going to give you anything, you have to earn every point.”

The Eagles with finish up their fall season Oct. 25-27 at the Elon Invitational.