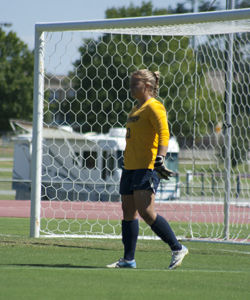 Senior goalkeeper Katie Merson (00) stands in goal. Multiple injuries to goalkeepers have tested the Eagles depth at the position.File photo

Conference play began this weekend for the Georgia Southern University women’s soccer team, and it found itself battling with a unique situation at the goalkeeper position.

Last season, senior goalkeeper Katie Merson won the Southern Conference Championship Most Outstanding Player Award and was selected to be on the SoCon All-Championship Team. Along with those accolades, she also played every minute in goal last season for the Eagles. The team was expecting big things for Merson coming into the 2013 season.

However, due to an injury in the preseason, Merson has been sidelined up to this point in the season. Additionally, sophomore goalkeeper Emily Gosson fell to a preseason injury. After these major setbacks head coach Brian Dunleavy was left with one healthy goalie, sophomore Heather Kirkover.

To stay on the safe side, at the beginning of the season coach Dunleavy had a conversation with a club team junior goalie Molly Williams. They came to the agreement that Williams would try out for the team so they could have a goalie in the event that Kirkover had to leave a game.

This started the process of getting Williams cleared for NCAA eligibility.  During this time, lady luck seemed to avoid GSU.

On Sept. 22 the Eagles took on Mercer University, with Heather Kirkover unable to take the field due to an injury in practice. Coach Dunleavy found himself away from home, with no goalie.

“I asked the team who could take over in goal, the team decided it should be [Alanna] Rudd,” Dunleavy said.

Senior midfielder Alanna Rudd accepted the responsibility of taking the goal, a position she had not played since middle school. Despite her inexperience at the position Rudd managed 11 saves but the Eagles could not pull off the victory.

Last week relief came for GSU as Molly Williams was cleared for eligibility and was able to make her college debut against Samford University. Williams had a spectacular coming out, nabbing 13 saves and holding off the top-ranked opponent as the teams came to a 0-0 draw.

Williams continued to impress on Saturday, as she held the University of Tennessee at Chattanooga to one goal in a 2-1 win.

The Eagles will take on Appalachian State University this Friday in their third conference match of the season. Kirkover’s injury timeline was not disclosed so it is not clear whether Kirkover or Williams will be in the net for GSU. The game will be at 7 p.m. at Eagle Field.