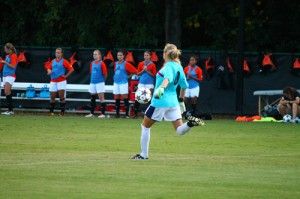 Junior goalkeeper Molly Williams (0) clears the ball up the field. Williams made her debut in goal against Samford University last month.Photo by: Ryan Woodham

Junior goalkeeper Molly Williams of the Georgia Southern University women’s soccer team stepped up to play goalie in a time of need.

With all of the other goalies riddled with injuries, GSU head coach Brian Dunleavy came to Williams for help. In her first two games with the team, Williams allowed only one goal and went for a combined 17 saves.

How did you feel when coach Dunleavy asked you to try out for the team?

“I was just really excited, you know it was like a second chance at getting my dreams, so I just had to say yes.”

Were you planning on playing in college?

“Yeah, I originally came here to play, but it just kind of fell through with the switch-over of coaches, but I got a second chance and I couldn’t be more grateful.”

How did you feel about being named SoCon player of the week?

“It was awesome but also kind of nerve-racking, because, you know, I just came out big and now I have to keep the bar up high, so it’s a little tough but these girls are great and they just lift you up the entire game.”

So you do get along well with your new teammates?

“Yes. They are the most supportive girls, whether you make a mistake, just anytime, through practice, through games, they’re just cheering you on.”

How did your old club teammates feel about you getting this amazing opportunity?

“They were so excited. They come to every game, they cheer me on, post things on Facebook, so I’m just glad I get to have friends in two places.”

What was going through your mind at the beginning of your first conference game?

“It was just excitement, like I was just stoked and I think that’s part of why I did so well. The adrenaline was just pumping, under the lights, against such a big school like Samford, it just worked.”

What do you feel you add to the team?

“I just think I help complete it. You know they were missing a player, and I don’t think that any one player is any better than the other.  We just fit together and I just came and helped put the last piece in.”

How do you feel you’ve adjusted from playing on a club team to a conference team?

“It was kind of hard, like lifestyle differences, but I think I’m doing well, just trying to keep up the level of play and keep it there.”

So what are some of the major differences that you’ve had to adjust to?

“Mostly just practicing every day, and fitness, eating right and staying hydrated and things like that, just trying to get my body used to it.”

Is this something you see yourself doing long-term?

“Yeah, definitely. I’m excited to be here and hopefully play next year as well.”