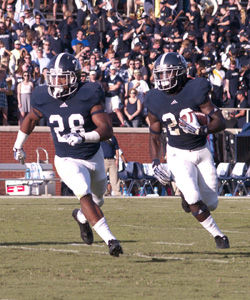 After an exciting victory last weekend, the Eagles are set to play Samford on the road Saturday.Photo by: Brandon Warnock

Coming off its nail-biting win over the University of Tennessee at Chattanooga, the Georgia Southern University football team looks to keep rolling as it heads to Birmingham to face Samford University.

Samford is coming into this game after having blown out Western Carolina University at home by a score of 62-23. The Bulldogs racked up 589 total offensive yards, with 408 yards coming through the air.

Samford redshirt senior quarterback Andy Summerlin carved up WCU’s defense to the tune of 327 yards with four passing touchdowns and no interceptions. The Bulldog’s offense will be the Eagles’ first test against a dangerous passing attack this season.

Facing Summerlin could be an inviting change of pace after GSU spent most of last game chasing UTC sophomore quarterback Jacob Huesman all over the field. Summerlin is a pure pocket passer and will not be scrambling on many occasions.

Samford posted amazing numbers on offense against WCU. The Bulldogs did, however, let up 443 yards of offense to WCU with 161 yards on the ground. GSU’s quarterbacks and banged-up running back corps could still give Samford problems on defense.

The duo of senior quarterback Jerick McKinnon and redshirt freshman quarterback Kevin Ellison should both see ample playing time in Birmingham this weekend. With the depleted number of running backs, McKinnon will most likely see more snaps at slot back, which will give Ellison more snaps under center.

With the loss of junior running back Dominique Swope for the season due to surgery, senior William Banks will see most of the carries in his place as he did last week against UTC.

Before thrashing WCU, Samford lost to Southeastern Louisiana University of the Southland Conference by a score of 34-31. In week two, Samford traveled to Fayetteville, Ar., and gave the University of Arkansas a scare, losing 31-21 to the Southeastern Conference opponent. The Bulldogs’ other two wins came over Georgia State University in the season opener (31-21) and Florida A&M University (27-20) in week three.

With The Bulldogs’ passing attack going up against the Eagles’ rushing attack, this has the potential to be a high scoring affair. The key is going be the play of the two defenses. GSU not facing a scrambling quarterback could be a game-changer, as the Eagles played well against a pass-first offense in week one against Savannah State University.