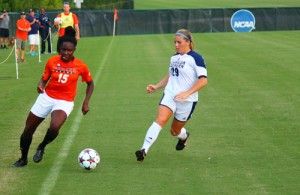 Junior forward Sydnie Van Curen (29) chases down the ball. The Eagles earned three points in their two games over the weekend.Photo by: Ryan Woodham

The Georgia Southern University women’s soccer team (2-5-2) opened conference play with a 0-0 tie against Samford University (6-2-1) and a 2-1 victory over the University of Tennessee at Chattanooga (4-5-0) over the weekend.

The Eagles had to enter both games without starting sophomore goalkeeper Heather Kirkover. Head coach Brian Dunleavy made the call to go with junior goalkeeper Molly Williams, who was called up from club soccer.

On Friday, GSU made the trip up to Birmingham to take on Samford. The Bulldogs entered the game with six wins out of its last eight games while the Eagles had only captured one win this season.

After only 45 seconds, Bulldogs’ senior midfielder Trine Taule launched a shot towards the Eagles’ goal but it collided with the crossbar.

The Bulldogs continued to attack Williams in goal.  Sophomore defenders Katey Lippitt, Jessie Eberhardt and Renee Nance had their stamina put to the test, being forced into one-on-one matchups.

Meanwhile, the Eagle offense struggled to get around the Samford defense. Junior forward Sydnie Van Curen and senior forward Alex Murphy combined for five of the six shots, with only one recorded as a shot on goal.

GSU managed to hold off Samford in regulation, forcing the game into two overtime periods, which both resulted in no scores from either team ending the match in a 0-0 tie.

The theme for the first game of the weekend was the steadfast determination and resiliency of the Eagle defense. The defenders anchored by Lippitt took on 33 shots and Williams, in her college debut, stepped up for her team in goal with 13 saves including a last second shot by Samford on the final play of the second overtime.

“The defense was amazing, they did a really good job of blocking shots and stayed organized,” Dunleavy said.

Sunday GSU traveled to Chattanooga to clash with the University of Tennessee at Chattanooga. Over 3100 fans arrived to help rally their home team against the visiting Eagles.

Twelve minutes into the game UTC forward Loryn Queen took a charging shot up the right side of the field taking the lead 1-0. The rest of the first half featured multiple changes of possession, with no team pulling away.

The Eagles started the second half with a vengeance. Five minutes after the whistle blew sophomore midfielder Cori Dulmage sent a pass over to Alex Murphy, who guided her shot across to the left side of the net, tying the game 1-1.

At the 80 minute mark freshman forward Jennifer Wittick advanced the ball over midfield then rifled a pass over to sophomore forward Nora El-Shami who slammed it past the Chattanooga goalie, taking the lead 2-1.

With only a minute left in the game UTC sent a final charge toward Lippitt and her defense. A final shot went up and was saved by Williams, ending the bout 2-1.

Coach Dunleavy was elated by the win and how well his team performed.

“We came out flat in the first half and really stepped it up in the second half and played good soccer,” Dunleavy said.

GSU will try to duplicate its defensive success as they come back home this Friday to battle Appalachian State University (3-4-2, SoCon 0-0-2) at 6 p.m. at Eagle Field.