The Orange Constant returns to GATAâ€™s 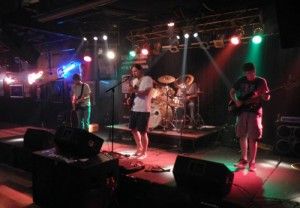 The Orange Constant is just a year old. The band has played in the Statesboro Music Festival, and has begun touring and playing shows outside of Statesboro in cities such as Atlanta, Macon, Augusta, Valdosta and Athens, where it played last weekend.

“It’s encouraging going to other cities in the sense that when we have a good turnout or the show goes well, it’s like a morale booster,” Andrew Brantley, lead vocals and senior general studies major, said.

“At the same time it’s humbling because at every venue you go to you just see posters everywhere and all the other promotional material in this sea of other bands out there and you have to differentiate yourself,” Brantley said.

The Orange Constant blends and draws inspiration from a variety of music genres including rock, alternative, reggae and progressive rock. Bands like Moon Taxi, Widespread Panic and Perpetual Groove are big influences for the band.

“Perpetual Groove is a big [inspiration], especially like the changing in dynamic and the emotionalism. Those three [Moon Taxi, Widespread Panic, and Perpetual Groove] all capture us pretty well,” Brantley said.

“[GATA’s] loves having The Orange Constant in. Being a musician myself, I think this band is one of Statesboro’s musical gems. It’s nice to see a group of guys creating their own thing and not just playing covers,” Greg Kearney, GATA’s manager and local musician, said.

The Orange Constant formed in September 2012, and started making a name for itself by playing at house parties and slowly emerging onto the local bar scene. The band played its first show at Dos Primos and shortly after was booked by other local bars such as GATA’s and Gnat’s Landing, Lee said.

“I like GATA’s a lot because they definitely have a high respect for bands, and their sound guy John is great and good at what he does. It’s actually one of my favorite places to play,” Lee said.

Along with being full-time students and a full schedule of shows lined up the group is currently working on recording and debuting their first EP, which it hopes will be out by the end of the year.

“These guys constantly bring a different show every time they play and that’s one of the reasons we like having them,” Kearney said. “If the sound guy digs it, you know you have a good band.”