Furman blocks GSU from a win 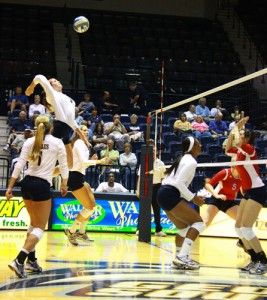 The Georgia Southern University volleyball team fell 3-2 on Friday in a hard fought battle against the Furman University Paladins.

This was the Eagles’ first conference loss of the season and it ended their nine match winning streak.

Furman did not seem to have an answer defensively for junior middle K middle ym Coley as she recorded 17 kills and 3 blocks. Her offensive game plan was simple.

“[I] swung deep and high and over the block. [I] just tried to make the block irrelevant,” Coley said.

Senior outside hitter Nicole Jeschelnik also had a standout performance, leading the team offensively with a double-double recording 19 kills and 17 digs.

“When I was able to hit line, Kat (sophomore setter Katalin Minnerly) was setting it fast and their blockers weren’t able to get out to the pin so I had about a balls length of line. Since she was already drifting, she couldn’t get there in time and was I just able to blow up the line,” Jeschelnik said.

The Eagles s eemed to have control going into halftime and were able to use that momentum in the third game but Furman turned up its serving, throwing the Eagles o  ff in the fourth game.

“Our passing dropped a little bit and when our passing wasn’t there we weren’t able to get all three of our hitters in. If we get a good pass, all three hitters can hit and it throws off their defense but if we don’t have a good pass, it drops down to two or one hitters,” Jeschelnik s aid.

Head coach Dustin Wood also noted the team’s inconsistency with its passing as Furman began to serve more aggressively in the fourth and fifth set shifting the momentum back in favor of the Paladins.

The Eagles l ed 8-7 in the fifth set when they switched sides but Furman’s freshman middle blocker Ashton Gregory got a kill and sparked a 4-0 run by the Paladins, extending the lead to 11-8. The Eagles would only score one more point after the Furman run, leaving the final score 15-9.

Furman was led by junior outside hitter Andrea Fisher who recorded 21 kills and 5 blocks.

GSU has a tough schedule ahead of it, traveling to four away SoCon games against the University of North Carolina at Greensboro, Elon University, Appalachian State University and Western Carolina University. GSU returns to Hanner Fieldhouse against another SoCon opponent, the University of Tennessee at Chattanooga, Oct. 25 at 6 p.m.

The Eagles have a chance to bounce back in conference play in their next match t aking on UNCG in Greensboro, N.C. on Friday at 7 p.m.