Dracula brings the chills to the Averitt 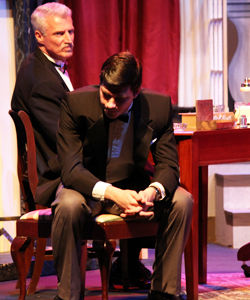 The Averitt STARs of the Averitt Center for the Arts performed “Count Dracula”, a play introduced to Statesboro by director Eileen Baynes, this weekend.

“[Based on] what I know of the story, it follows the original script, and they’ve done a really good job. I’m impressed,” Gregory Chamblee, professor of teaching and learning at Georgia Southern University, said.

The play is set mainly in the study of an asylum for the criminally insane that is run by Dr. Arthur Seward, who is played by John Williamson. Dr. Seward’s sister Sybil, played by Susan Jackson, opens up the can of worms for the entire play when she invites their new neighbor Count Dracula, played by Michael Porter, over for dinner. This is when Dracula is introduced to Dr. Seward’s daughter, Mina, and becomes instantly drawn to her. From there things begin to take a downward turn for each character in the play.

“When it comes to the show, it was very exciting to do something that was 37 years in the making. Our director has waited 37 years to do this play,” Anastasia James, the actor that plays Mina, said.

Seward’s daughter Mina is engaged to a local architect played by Brad Wells, Jonathan Harker. Harker is very skeptical of Count Dracula and Mina’s weakening physical and mental condition that begins when the Count moves across the valley from the asylum.

As Dracula continues to become closer to all the residents of the asylum Mina becomes more and more sickly. This is seems odd to her family and friends which leads to the appearance of Professor Heinrich Van Helsing, a college pal of the doctor. Van Helsing is not only a professor, but also a doctor for rare diseases and has a knack for uncovering supernatural instances. Upon meeting with Mina he notices the bite marks on her neck, which leads him to believe that there’s no doubt the bites are from a vampire.

Dr. Seward, Harker, and Van Helsing ally together to take down Dracula with the help of mad man Renfield, a mentally insane inmate played by Derek Joyce. Once Mina’s transformation is nearly complete, she goes to Dracula and leaves a trail behind her.  The trio find Dracula’s coffin hidden away underneath his castle in a crypt. This crypt is where the Count meets an untimely end as Dr. Seward and Van Helsing stab him in the heart with a wooden stake.

The play ends with a shaken Mina in her fiancé’s arms.

Chamblee said, “You’ve missed a good one if you didn’t show up.”