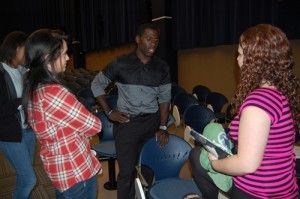 Director of the film Christian Washington answers questions for the movie's debut.Photo by: Christal Riley

Tonight, students gathered in the Russell Union Theater at to view the film ‘Chance’ written and produced by Georgia Southern University students.

The picture won for Best Director at the Statesboro Film Festival in April.

“ I thought the film was excellent. It was a well-told story, bold yet appropriate style. The film was well executed and the acting was great. The writing and cinematography was fantastic and it was very moving,” Brian Graves, assistant professor of multimedia communications, said.

“The film taught me that everyone should care about people who care about them, and everyone deserves a second chance,” Malik Phillips, junior international studies major, said.

The 25-minute film was shot last spring and debuted at the Statesboro Film Festival, where it was nominated in the Best Picture, Best Director and Best Cinematography categories.

Christian Washington, director of the film and senior communications and film major, said, “’Chance’ is just the first step for us. Drama is the truest thing you can make. Being a college student, decision-making is going to be an important factor in your life.”

“Life in general gave me inspiration to make this film. Struggling and trying to feel as though you’re making the right decision gave me the vision to create ‘Chance,’” Washington said.

Washington plans to debut a documentary in the spring of 2014.