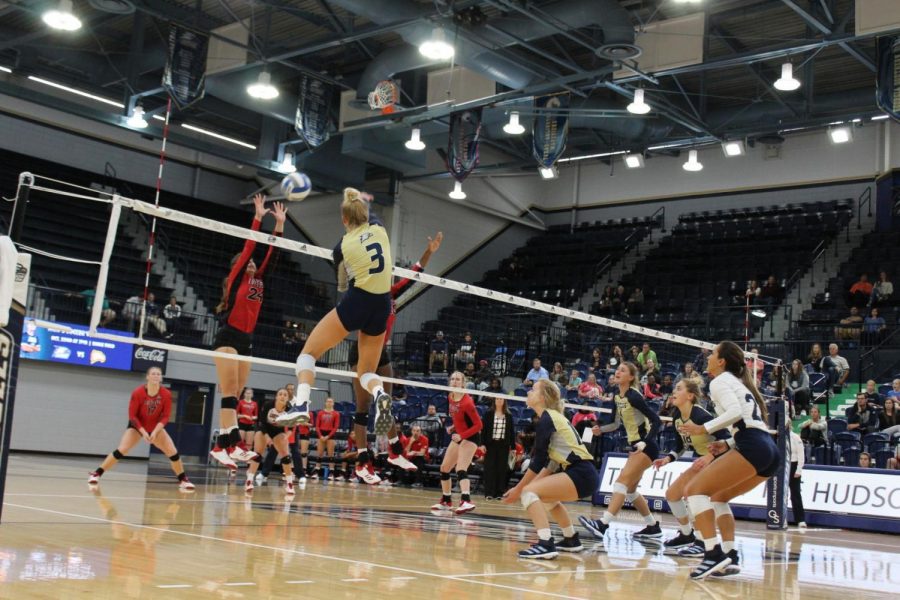 After this loss the Georgia Southern volleyball team’s record falls to 7-19, and they are 2-13 in conference play.

STATESBORO –  The Georgia Southern volleyball team lost 3-2 to Georgia State on Tuesday night in their last regular season game at the Hanner Fieldhouse.

For the Eagles, libero Landon Jones collected a career-high 39 digs, coming just one shy of the school record. Outside hitter Carly Turner had 13 kills and three blocks, and right side hitter Mya Wilson also tallied 13 kills. Middle hitter Sylar Ball finished with 11 kills and a pair of blocks, and setter Madison Brown had 47 assists and eight digs.

After Southern won the fourth set 25-22, Georgia State got out to a 7-2 lead in the fifth set. The Eagles came back to bring the margin to 11-9 on a kill by right setter Haley Fuller, but Georgia State scored the next four to end the game.

Head coach Chad Willis said that execution errors caused by hesitation in the fifth set were his biggest frustration, and that he would rather see errors made for being too aggressive.

“I gave the example in the locker room of Mya Wilson taking a big swing in the fifth on that slide and she hit it out, but I explained to them that I’m perfectly fine with that error because she’s going hard and going after it,” Willis said. “I’d rather take an entire match of those than the hesitant, not wanting to make mistakes. That’s something we’ve been preaching and struggling with all year.”

Serving and passing were the story of Tuesday’s match, according to Willis.

“They did a better job of getting after us from the service line in the fifth set than we did them,” Willis said.

After this loss the Georgia Southern volleyball team’s record falls to 7-19, and they are 2-13 in conference play.

The Eagle volleyball team will head to Atlanta on Nov. 15 to play their final regular season game against Georgia State, with game time set for 6:30 p.m. With the win on Tuesday, Georgia State picked up a half point in the Southern versus State Rivalry Series.

“I think these type of matches always come down to who can control first contact,” Willis said. “We’ll address that tomorrow in practice and Thursday when we get down there and hopefully earn that half point Friday night.”