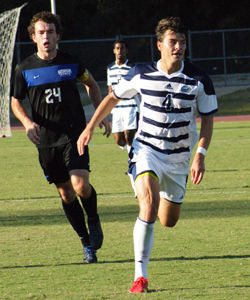 For the second time this season, the Georgia Southern University men’ s soccer team found itself on a two-game winning streak as it beat Jacksonville University 4-1.

As the rain fell, it would not deter the Eagles from jumping out to an early lead in the first half.

GSU would start off the rout with three goals beginning in the 14th minute as freshman forward Jeremy Rector was found after redshirt junior Ethan LaPan drew the keeper out for an easy goal.

In the 36th minute, GSU would strike again this time with redshirt freshman midfielder Aidan Reising would score his first career goal off senior midfielder Hunter Norton’s through ball.

It was a special day for Vargas as his parents were visiting from Costa Rica and and were able to see a game for the first time.

JU would score in the early minutes of the second half to cut the lead to 3-1.

However, redshirt sophomore midfielder Rocco Bagley would score the final goal of the evening as the Eagles would win 4-1.

GSU will take on Southern Conference opponent University of North Carolina-Greensboro on the road on Saturday at 7:30 p.m.