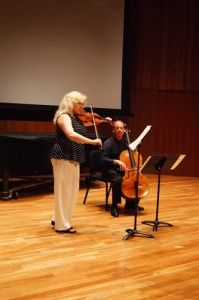 The Elishas played the violin and cello as part of their performance.Photo by: Heather Yeomans

Earlier in September, two Georgia Southern University professors had a heartwarming experience while performing for the citizens of Newtown, Conn. as part of the Healing Newtown Project.

The husband-and-wife duo, Larisa Elisha, Ph.D., and Steven Elisha, Ph.D., both professors of music, traveled to the small town in Connecticut to perform at the Newtown Arts Festival.

“The town has amazing people,” Steven said. “You can sense a tremendous amount of bonding between the community and an outpouring of love between everyone.”

The experience was filled with nothing but love and the strength of the community, the Elishas said.

From the moment they entered the town, they were greeted with hugs, love and felt part of the community’s family, Larisa said.

“We were embraced and welcomed like a family,” Larisa said. “It was very touching because you come in not knowing anybody and people just treated you like they knew you for forever.”

From performing for Healing Newtown to teaching high school students, the professors felt nothing but joy and a sense of camaraderie with each new place.

The professors could see how much their gift of music helped the community.

“The performance will hopefully fill lives with joy and beauty after such a tragic incident,“ Steven said.

The connection between GSU and Newtown extended past just the Elishas performing at the festival.

Terry Sagedy, head of the Newtown Arts Festival, graduated from GSU in 1981.

In addition, a family with a son who is currently a student at GSU decided to contribute to the Healing Newtown project after hearing about the Elishas’ performance.

Lee and Doris Wortham have contributed money to the Healing Newtown project. When the family learned about the two professors performing, they wanted to contribute to the cause, Steven said.

“There are many connections including the alumni and it will be interesting to see how this relationship continues,” Steven said.

The event will stay with the Elishas for the rest of their lives and they felt lucky to be able to attend. The Elishas will attend next year’s festival and look forward to returning once more to perform for the town.

“Music has the power of healing,” Steven said. “When there are no words to be said, there is music to be played.”