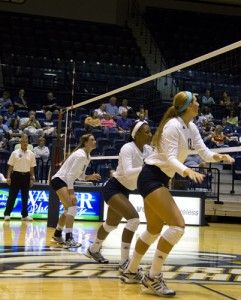 Heading into the match, the Eagles have won two straight matches 3-0 against the University of North Carolina at Greensboro and Elon University.

The Mountaineers’ defense has been up and down this season. It will rely heavily on junior middle Lauren Gray who has 59 blocks. Sophomore libero Meghan Mahoney plans to contribute as well, leading the team with 399 digs.

Curry has been impressive this season averaging 1.21 blocks per set and has compiled 76 blocks on the year.  Sophomore libero Alex Beecher will also play a key role for the defense. Beecher leads the team with 309 digs on the year.

Corrigan has averaged 3.50 kills per set this season and has not left the court. Setting up Corrigan will be sophomore setter Paige Brown, who sets the ball nearly 11 times per set.

Last season, the Eagles triumphed over the Mountaineers 3-1. They will hope for a repeat performance that will net them their sixthconference win. GSU is currently tied for first in the conference with Furman University (9-8, SoCon 5-1). Furman is the only SoCon loss for the Eagles this season.

The rivalry game will take place Friday at 7 p.m. in Boone, N.C.