Stompfest steps back into rhythm 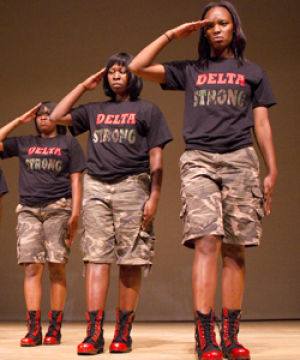 The percussive sounds, rhythms and beats are coming back to Georgia Southern University this weekend at the fourth annual Stompfest Step Show.

Stompfest is brought to campus through the collaboration of the GSU chapter of the NAACP and the Multicultural Student Center and will be on Saturday at Hanner Fieldhouse at 7 p.m. Tickets are available now for $20 at www.GSUStompfest.com.

Last year the winners were the Savannah State University chapter of the Omega Psi Phi fraternity, who are returning to defend their title, and GSU’s chapter of the Alpha Kappa Alpha sorority. For their wins, each received $1,000.

“NAACP is bringing Stompfest back for the Georgia Southern University community. With Stompfest, everyone gets to enter into a culture of step, dance and theatrical performances that they may not have seen before,” Kashia Knight, president of NAACP GSU chapter, said.

There will eight teams from the National Pan-Hellenic Council from across the state, but those that will actually be participating for the prize will be a surprise for audience members.

Names of the groups stepping have not been released in order to add a surprise element for audience members.

“Part of our mission for the office is to work with our multicultural student organizations and to be advocates for them and collaborate with them to bring these diversity events to campus. We thought that working with the NAACP to bring Stompfest to campus would be a natural fit,” Dorsey Baldwin, Multicultural Student Center director, said.

The Stompfest Step Show has been a sold-out event in past years and aims to bring in a large audience this year as well.  As many students are encouraged to come as possible.

“In just three years Stompfest has become the biggest student-led multicultural event that we have, we need people to step out and show their support these kinds of events. The impact that students can have here is much bigger than just buying a ticket,” Will Hill, event coordinator, said. “When students come to events like this they are helping more multicultural events to come to campus.”