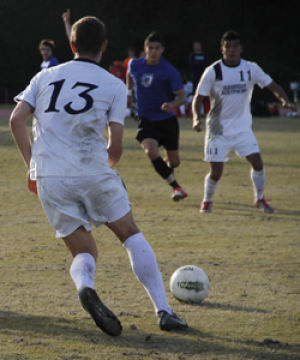 A thrilling double-overtime win earlier in the week over Presbyterian College could not carry over this past weekend as the Georgia Southern University men’s soccer team fell in its Southern Conference opener to Davidson College by a score of 2-1.

The Eagles opened up the SoCon campaign with a goal as freshman forward Jeremy Rector found a cross for senior forward Witt Carlisle for a goal in the seventh minute of the game.

The lead was not long-lived, as less than a minute later the Wildcats found an equalizer provided by junior midfielder Alex Feliciano, assisted by senior midfielder Chris Pettiglo, in the form of a cross from the wide area and into the box to tie it at one apiece.

Both teams continued to be deadlocked until halftime. DC came out in the second half and would find an advantage over the home side as sophomore forward Valeriy Sviderskiy scored his fifth goal of the season off a rebound.

The Wildcats outshot the Eagles by a tally of 18-14 and were ahead 11-4 in shots on target.

GSU would not be able to overcome this final goal and dropped to 4-5 on the season.

A positive for GSU was the goalkeeping as senior goalkeeper Neal Bates added eight more saves to his season total to put him at 59 saves and a .849 save percentage.

This is the second straight year that GSU has lost to DC by a score of 2-1 and the first time that the Wildcats have won in Statesboro since 2009.

The Eagles will look to bounce back to .500 in both overall and conference record this Saturday as they take on Wofford College at 7 p.m. at Eagle Field.