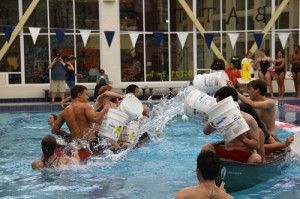 Battleship takes place each year at the RAC in October. Opposing teams try to sink each other's canoe, with four teams in the pool at a time. The last team floating wins.Photo by: Drew Heimlich

Georgia Southern University’s RAC put together a game of Battleship Tuesday night at the RAC pool with seven teams participating in the event.

The objective of Battleship is simple: sink your opponent’s canoe. The teams were composed of four members each, and every participant received a large empty chlorine bucket.

The teams were loaded into full-sized canoes and four teams competed in each heat. The last boat floating won and continued on to the next round. Players were not allowed to extract water from their canoe in any way and were only permitted to sit or kneel.

“One of our team members brought it up to us and said it looked really cool so we all just decided to do it and it ended up being real fun. The secret was to balance the canoe really well or we would just end up sinking ourselves,” sophomore nursing major Ashley Hayden of team Southern Eagles Archery said.

Southern Eagles Archery, a team showing support for its club, put up an incredible fight in each one of the heats it was in but the team just wasn’t able to obtain the win.

“One of our fraternity brothers saw an advertisement for this and just got really behind it so we were just like, ‘let’s do it,'” sophomore computer science major Garrett Manley of the spirited team The Ghost Whales said.

The Ghost Whales tended to play more defensively than the other teams.

“During the second round we realized that you could actually block a lot of the incoming water with your empty bucket so that made it simpler,” Manley said. “We won one, lost two, but at the end there we just found ourselves in between two boats, taking on a lot of water so there just wasn’t much we could do.”

Team Student Media Bro turned around its bad luck after losing the first two heats, winning the losers bracket and putting up a good fight but ultimately losing to the champions in the finals bringing home a strong second place.

It was an intense competition, but after the completion of every round, The Bird Cowboys, a team composed of senior engineering majors Josh Blasius, Riley Shay, Stephen Hickman and Jeffrey Therrien, came out with the win.

“We really just did it on a whim, sounded like fun. Get some exercise, kick some butt, why not?,” Blasius said. “We definitely did come with a strategy, you get four engineers in a boat and you’re going to get strategy.”

Blasius said, “It was real good. We had one loss, but I think overall we synergized well as a team and we produced.”

For their accomplishments members of the team got their very own souvenir beer mug.