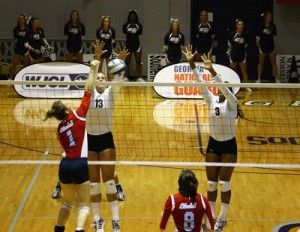 The Georgia Southern University volleyball team was unable to close out a one game lead over the Furman upsets GSU Furman University Paladins, losing 3-2 in a close fifth set.

The Eagles got off to a slow start in the first game losing 25-23 but were able to pick up momentum in the second and third game with a dominant offensive attack.

The GSU offense seemed to slow in the fourth game losing a lopsided battle 25-15.

Although the eagles were unable to pull out a victory tonight, Senior Nicole Jeschelnik had a standout performance offensively and defensively finishing with 19 kills and 17 digs.

Head coach Dustin Wood noted the back and forth momentum in the game. “We made plays, they made plays. They were just more aggressive. They out served us in the fourth and fifth set. It was a well played match though,” Dunleavy said.

The Eagles have a chance to bounce back next friday against the University of North Carolina at Greensboro in Greensboro, NC.