Budgets and boutiques: The better buy 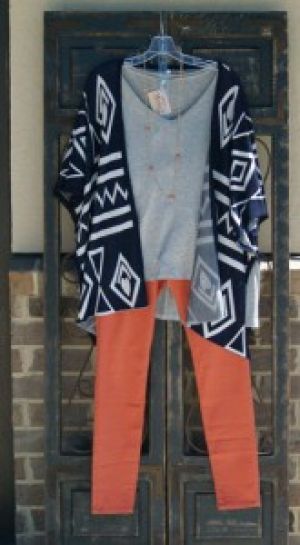 The downside for fashionistas living in Statesboro is that the pickings can be slim, and online shopping and frequent trips to Savannah can get expensive very quickly.

Both boutiques have a sense of modern southern style, with bright colors, patterns and plenty of chevron and bows, a trend that is not going anywhere anytime soon.

These boutiques may draw similar crowds, but are quite different. Walker’s is different from any boutique in Statesboro. Mainly because, while getting a prescription filled, one can browse specially-made home decor, have a cup of coffee and enjoy freshly-baked goods and pick up an outfit for game day all in the same place

Walker’s offers designer clothing and accessory brands such as Judith March, Joyous and Free and Miss Me Couture, along with monograming on just about anything a southern belle’s heart could desire.

“I don’t think we have one particular type of style. We have our temporary type of clothing for your college aged girls, and we have our missy line for more mature women, and we carry some high-end lines as well such as dress that can range from two hundred dollars to thirty six dollars,” Kala Allmond, Walker’s store manager, said.

Entourage has been open in Statesboro for over a year, opening its doors in March of 2012, but its competitive prices and constant flow of new and trendy stock has made it the boutique to beat.

“College aged students that like to go to football games are our main target customer. We come in touch with a lot of the sororities on campus and we do special discount days for them,” Hayden Milliron, Entourage store manager, said. “We have a lot of not-college-aged students who think the stuff it too young for them, which it most definitely is not. But we do have a lot of good locals and regulars that come in too and love our jewelry.”

Walker’s offers high-end brands and handmade items, which makes its prices higher than Entourage. Even though it could be argued that higher end products are typically made with better fabrics and last longer, which makes them worth the money.

For the trend-follower, Entourage seems to be the better choice when shopping for affordable and trendy clothing in Statesboro. But for those looking to splurge a little more for items that can survive a few seasons, Walker’s is a one-stop shop.