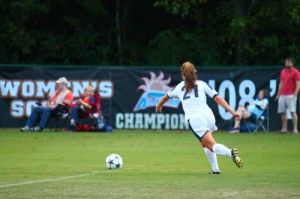 There will be a nice change of pace for the Georgia Southern University women’s soccer team (2-7-2) tonight when they play non-conference opponent Francis Marion University (0-11).

For one of the first times in the season, the Eagles find themselves at a statistical advantage. Francis Marion has only scored six times on 99 shots this year against 10 goals on 120 shots for GSU. Both teams have a shot percentage in the mid-40s, but the Patriots have allowed seven more goals on the year.

Defensively it should be a good chance for GSU to prepare for the rest of the season as the Patriots have struggled to put up points this year.  The sophomore defense for the Eagles of Renee Nance, Jessie Eberhardt and Katey Lippitt has allowed 23 goals this season and will try for their third shutout of the season.

Junior forward Elizabeth Asare, who has taken 13 shots this season and scored on two of them, will lead the FMU offense. Senior forward Yasmin Bunter leading the Patriots with 28 shots and two assists will assist Asare in peppering shots on the Eagle defense.

The Eagle offense is prepping for a display of productivity. Freshman forward Jennifer Wittick currently leads the team with three goals, and she is ahead of sophomore forward Nora El-Shami who has two and senior forward Alex Murphy who also has two. All three have taken 17 shots this season and have one assist apiece.

El-Shami will be seeking redemption from GSU’s losses over the weekend.

“We have to finish our chances and fight until the end in the backfield,” El-Shami said.

The Patriots will attempt to defend the attack against sophomore goalkeeper Taylor O’Berry who has played all season for FMU, nabbing 66 saves. In front of O’Berry will be junior defenders Sandy Odembo and Kristina Marra. The triplet has started every game for the Patriots and they hope to grab their first shutout on the year.

Head coach Brian Dunleavy has his game plan prepared for Francis Marion and has keys he wants his team to work on improving.

“We need to get our mental focus back, and realizing that we are still in it and we are all about the playoff hunt,” Dunleavy said.

This is the first time GSU has faced off against FMU so the Eagles look to make a good first impression. The out-of-conference match up will be played at 7 p.m. on Eagle Field.