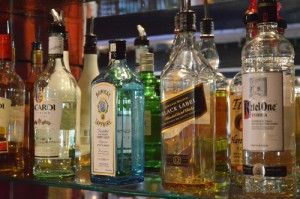 Starting Sunday, Collegiate Alcohol Awareness week begins at Georgia Southern University and over 1,000 other campuses around the nation.

“Unfortunately, while drinking is widely acceptable, students believe that they are invincible to the dangers and potential consequences of irresponsible drinking,” Rebecca Hotard, president of the Wellness Ambassadors, said.

“Shot of Life,” hosted by the Wellness Ambassadors student organization, will occur on Oct. 23 at 7 p.m. in the Russell Union. The event plans raise awareness about alcohol use and the decisions that can be made while under the influence.

There is a large drinking culture at GSU, since over half of the student body reported drinking on a regular basis, Hotard said.

In order to better engage the students and show them that these possibilities are real, a “Shot of Life” will be presenting the story of Sean Goral, quadriplegic senior biology major at GSU.

Goral was involved in a car accident this summer in which he was a passenger in a car driven by an intoxicated driver.  He is quadriplegic now because of this incident.

“College students just need to be aware of their surroundings and look out for their friends.

You never think this could happen. A thousand college students go out drink and make the same decisions every week that got me in a wheelchair,” Goral said.

The event will raise money for Goral, and any other donations will allow students to take part in a raffle.

A free taxi service will also be available to win for students 21 and over. The service is provided by Boro D.D. and will promote responsible drinking habits.

On Oct. 24 in Sweetheart Circle at 10 a.m., the Governor’s Office of Highway Safety will host The National Teen Driver Safety Week Media Tour.

Students can obtain more information about safer habits and how to act responsibly when drinking from the Office of Alcohol and Other Drugs Program.