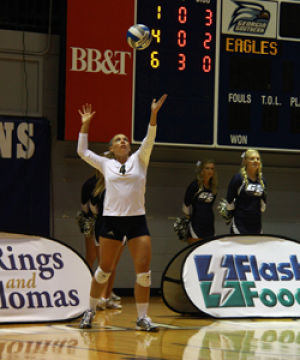 After losing to Furman University and ending a nine-match winning streak, the Georgia Southern University volleyball team (17-3, 5-1 Southern Conference) came back with a vengeance and got two more wins under its belts.

The Eagles took on their conference opponents, the University of North Carolina at Greensboro Spartans (10-9, 3-3 SoCon) and the Elon University Phoenix (12-10, 3-3 SoCon).

“We played really well and our passing was good. It helped keep the defense honest and made it easier for (our) offense to put away balls,” Coley said.

“I think we played well, we took care of business I guess since we beat them, both the teams in threes,” Minnerly said.

With a tough schedule this season, the Eagles have been working hard to get on top and stay there.

“We’re just working individually. As long as we all do our parts, we’ll work well together,” Coley said.

After earning these two conference wins, the Eagles shot back up to the number one seed in the SoCon over Furman, which holds a 9-8 record overall and a 5-1 SoCon record.

This Friday, the Eagles will be back on the road taking on the Appalachian State University Mountaineers.