Volleyball aims to bounce back 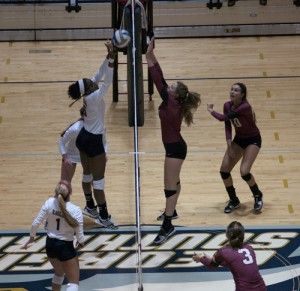 The Eagles will take on their conference opponents, the University of North Carolina at Greensboro Spartans (9-8, 2-2 SoCon) and the Elon University Phoenix (10-9, 2-2 SoCon).

The Eagles find themselves sitting third in conference standings after having their nine-match winning streak snapped in an upset loss to Furman.

UNCG has been, if anything, consistent, hovering around .500 all season and finds itself sitting sixth in conference standings. The Spartans are coming off a road loss to Davidson College.

The Spartans will be led offensively by redshirt senior hitter Olivia Humphries, who added 10 kills to her total of 203 last Saturday against Davidson. The Spartans are complemented by a defense led by sophomore libero Katherine Santiago, who sports an average of 4.6 digs per set.

Elon sits right behind UNCG in conference play, but seems to have hit its stride, winning eight of its last 11. Their most recent win came on the road at Davidson.

Both the Phoenix and the Spartans will look to contain junior outside hitter Jamie DeRatt, who has racked up 224 kills and 200 digs.

The Eagles will be on the road against UNCG at 7 p.m. tomorrow.