Volleyball to play the Citadel tonight 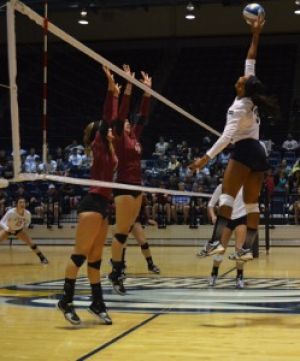 In its next Southern Conference match, Georgia Southern University’s volleyball team (14-2, SoCon 2-0) will play against The Citadel  (4-13, SoCon 0-2) Bulldogs at home in Hanner Fieldhouse.

The Eagles are ranked No.1 in the SoCon and are looking to win their ninth straight game.

The Citadel has had a tough season so far after losing its first two SoCon matches against Elon University and the University of North Carolina at Greensboro this past weekend. The Bulldogs are ranked No. 11 in the SoCon.

The Eagles will look for their next win behind the offensive attack of junior outside hitter Jamie DeRatt with 194 kills, sophomore right side Katie Bange and senior outside hitter Nicole Jeschelnik who both have 142 kills and Kym Coley with 109.

DeRatt was named SoCon Volleyball Offensive Player of the Week for the second time this semester. DeRatt averaged 4.22 kills, 3.56 digs and .078 blocks per set over the weekend. DeRatt posted career highs in kills, with 23, and digs, with 19, against Elon University.

The Eagles will play The Citadel, which is looking for its first victory against GSU after meeting 29 times in the past, tonight at 6 p.m. in Hanner Fieldhouse.