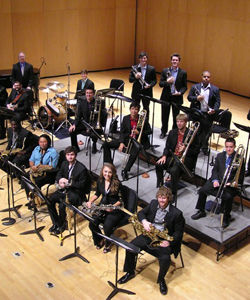 The Georgia Southern Symphony debuted its performance ‘Symphony and All That Jazz’ with the Jazz Ensemble last night for the first time.

The performance featured a variety of diverse tempos and styles from both jazz and classical roots. One of the feature pieces of the evening was ‘La Llama Azul’.

The exciting song presented a fast tempo along with strong percussion notes. In conjunction with the piano and the bongos, the Latin work transported the audience south of the border.

The Symphony opened the concert with Haydn’s Symphony No. 100 in G major, commonly known as the Military Symphony. The four movement piece begins with a soft introduction, featuring the flute and the oboe.

In the second movement, it continued to have a light tone, but suddenly shifts to a serious theme that caught audience members by surprise.

Menuetto, the third movement, regressed back to an up-tempo and noble, ballroom-like tune. The last movement finished with intense melodies assisted by the timpani.

“It always gets to the point that the concert is the best they play and tonight they did very well. It was very cohesive, there were no wrong notes, no wrong entrances; it was really tight,” Adrian Gnam, Maestro of the symphony, said.

The Jazz Ensemble changed gears once they arrived on-stage with its first song ‘Trouble in Taipei’. The quick tempo piece and on the spot improvised solos produced images of a vintage noir movie and took the imagination on a trip to vintage New York City.

For its performance of ‘In the Cool, Cool, Cool of the Evening’, the Ensemble was joined onstage by guest vocalist, junior psychology major Catherine Lentz. The song contained a fast tempo with entertaining lyrics.

“For [our] first concert of the year I think they did really well. I think we can do even better for the next one,” Bill Schmid, director of the Jazz Ensemble, said.