GSU loses nail-biter to Samford, falls to 1-2 in SoCon 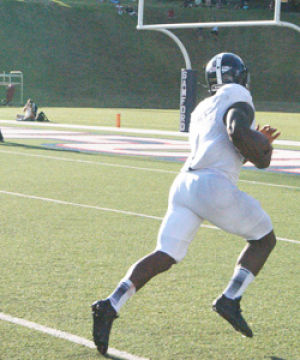 The Georgia Southern University football team went to Birmingham on Saturday looking to corral a high-powered Samford University offense, but was unsuccessful in a 44-34 defeat.

The game started off slow and was not indicative of the final score. The first offensive possessions for both teams ended in punts. Samford drew the first points in the game with a 19-yard field goal by redshirt freshman kicker Warren Handrahan.

The score remained 3-0 until the final seconds of the first quarter when Samford redshirt senior quarterback Andy Summerlin ripped a 74-yard touchdown pass to sophomore receiver Gavin Sinclair to put the Bulldogs up 10-0.

GSU had its voice heard in the second quarter, thanks to redshirt freshman quarterback Kevin Ellison and junior running back Tray Butler. Ellison connected with Butler for a 24-yard touchdown pass to put the Eagles on the board to tighten the gap and bring the score to 10-7. The score was Ellison’s first career touchdown pass.

“Kevin is trying really hard, he’s working hard at getting better each week. I think he is improving as a player. The more he plays, the better he’s going to get,” GSU head coach Jeff Monken said.

Later in the quarter, Ellison and Butler would connect again, this time for 58 yards, to give GSU its first lead of the afternoon at 14-10. This was the second of two touchdown passes of the day for Ellison, as he finished the day completing all seven of his pass attempts for 140 yards and the two scores. Senior running back William Banks broke a 15-yard touchdown to put GSU up 21-10 as the teams headed into the locker room at halftime.

“Going into halftime, we had pretty good momentum,” GSU senior quarterback Jerick McKinnon said. “Coming out I feel like we had it, but couldn’t hold onto the ball and had some turnovers. We faced some adversity and momentum started to swing [Samford’s] way.”

The second half the game witnessed many scores and two-point conversion attempts. Handrahan kicked a field goal late in the third quarter to bring the score to 21-13 and Samford senior running back Fabian Truss took the spotlight the rest of the quarter as he recorded two rushing touchdowns, both of which were accompanied with failed two-point conversion attempts. The score after three stood at 25-21 in Samford’s favor.

Early in the fourth quarter, McKinnon broke a 27-yard rushing touchdown to put the Eagles up 27-25, followed by a failed two-point conversion attempt.

The next two scores came from the Bulldogs through the air. Summerlin threw two touchdowns, the first of which was a 69-yarder to freshman receiver Karel Hamilton. The second was a 58-yarder to senior receiver Kelsey Pope, who recorded seven grabs for 201 yards on the day. With both scores accompanied by successful two-point conversions, Samford took the lead at 41-27.

McKinnon fought for a short rushing touchdown with four minutes left in the game to bring GSU within seven points, but Samford drained the clock on its last drive and put the nail in the coffin with a Handrahan 30-yard field goal. The final score stood at 44-34 as Samford took the last conference matchup between the two programs.

“Effort was bad, execution was bad, all of it was bad. You name it, it was bad,” Monken said. “Offensively, we weren’t moving the ball. We had to punt too many times. We can’t punt, we have to score and we didn’t do it.”

There were a couple of milestones in the game for both starting quarterbacks. McKinnon, who ran for 181 yards and two scores, passed former Eagles Roderick Russell and Greg Hill for sole possession of fifth all-time on GSU’s career rushing yards list. Summerlin, who threw for 495 yards and three scores, broke the Samford single-game record for passing yards in a game. The previous record of 478, which he set earlier this season, was in a loss to Southeastern Louisiana University.

GSU has a chance to bounce back this Saturday at 1 p.m. against another conference rival in The Citadel.