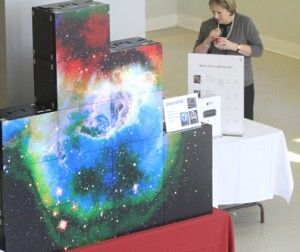 A galactic presentation is shown at last year's TechEXPO. TechEXPO is held every year by Georgia Southern University to showcase state-of-the-art technology for attendees.File photo

Georgia Southern University’s Center For Academic Technology And Support plans on introducing students to exclusive technology during their upcoming TechEXPO.

The TechEXPO is GSU’s annual technology show that showcases state-of-the-art technologies for the university and students to use as teaching and studying tools.

The TechEXPO will be held tomorrow from 9 a.m. to 4 p.m. in the Information Technology Building. Admission is free. Students who show their Eagle ID at the door will be eligible for door prizes and raffles.

A competition with IT students to build the fastest computer in Statesboro will also be held.

“The computer shootout is a competition sponsored by Lenovo for students to display their creativity with electronics. This will be the sixth year it’s held,” Kendall Whitfield, helpdesk technician for the Center of Academic Technology, said.

“The CPU faceoff will be a competition for the most powerful computer build. The competition will be held from twelve p.m. to two p.m. Competitors will test out their software for two hours and whoever receives the highest score wins,” Whitfield said.

There will also be free giveaways and discounts on some items in the IT Store.

“Monster is giving away headphones, Gopro is giving away a high-end camera system, and a speaker system will be given away as well,” Bill Gargano, director of Computer Sales and Services, said. “The IT store will also be giving a discount on some items for most of the day.”

The TechEXPO will have several venders there to show off their electronics.

“There will be thirty-five major electronics manufacturers here. Just a few are Dell, Apple, Samsung, Lenovo and Monster. We encourage you to come out and see all the technologies we have in store for you.” Gargano said.

Informative breakout sessions will be held as well.

“A lot of cool new items will be displayed,” Gargano said. “My favorite that I’ve seen so far would have to be the Pivothead sunglasses. Pivotheads are sunglasses with built-in cameras in them.”

Gargano said, “We encourage all students in faculty to come out and take part in the TechEXPO, there is a large abundance of things to get into and we hope you’ll enjoy them all.”