GSU aims to bounce back at home 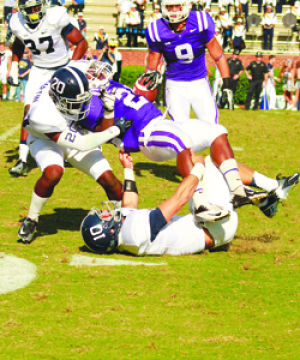 After a gut-wrenching loss in the cold confines of Kidd Brewer Stadium, the Georgia Southern University football team returns home for a showdown with the Furman University Paladins.

GSU is coming off a 38-14 loss to arch rival Appalachian State University, but Furman did not do much better last week.  The Louisiana State University Tigers crushed Furman 48-16 and scored 28 unanswered points in the second half.

App. State gave the Eagles’ secondary all kinds of trouble, but the Furman passing attack is not nearly as formidable.  Furman averages 145 passing yards a game and sophomore quarterback Reese Hannon failed to throw a touchdown the last time GSU played Furman.

GSU won the game 38-17 and pushed the all-time series record to 16-8 in favor of the Eagles.  Furman has not beaten GSU since 2009 when Chris Hatcher roamed the sidelines as head coach.

This season Swope will not be on the field, and McKinnon is uncertain after injuring his ankle against App. State.

“I think he’ll be able to go, but to what extent we don’t know,” head coach Jeff Monken said.  “It’s still sore right now, but hopefully during the course of the week it will get better.”

With McKinnon nicked up and senior fullback William Banks missing the last two games, GSU is going to need redshirt freshman Irving Huggins to carry more of the load.

Huggins had 78 yards on 17 carries when McKinnon went down.  This was by far the best game of his young college career, because he did not have 10 career carries coming into the game.

GSU has not done well against offenses that move the ball well through the air.  Samford University and App. State passed for over 350 yards and at least two touchdowns against GSU.

The back end of the defense gets the blame for an opponent’s big passing day, but all three levels of the defense play a part in giving up the big plays.

“We have to put more pressure on ‘em and make the guy get rid of the ball quicker,” Monken said.  “When we don’t have to cover them as long they don’t have the opportunity to make those double moves.”

Saturday the Eagles will try to get back to .500 in the Southern Conference, but with this being the last meeting between the two schools GSU should expect Furman’s best punch.