GSU professors to perform in Newtown 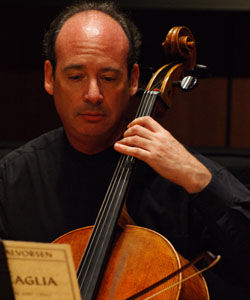 Steven Elisha began playing the cello when he was six.Photo by: Heather Yeomans

Steven Elisha, Ph.D., and Larisa Elisha, Ph.D., will put on a concert at the Newtown Meeting House as a part of the “Healing Newtown” program at the festival.

The Elishas recognize this experience as humbling and an honor to be able to participate in this festival.

“When you are facing tragedy, there has to be something that balances it,” Steven Elisha said.

Steven Elisha began playing the cello at the age of six. He began performing at the age of 15 and appeared as a soloist with the Albany and Schenectady symphonies in New York.

Larisa Elisha, acclaimed Russian violinist, is a distinguished international soloist, having performed in Russia, Belarus, Ukraine, Poland, Italy and many other countries.

“It is a blessing that we are able to share our personal and professional lives together,” Steven Elisha said. “Our hearts are very connected when we play.”

Steven and Larisa Elisha, founders of the Elaris Duo, felt the need to help with the mental building and renewal process of those affected in the Sandy Hook tragedy.

“It is a great honor,” Larisa Elisha said. “We’re very excited about it and we take responsibility to actually be there and represent Statesboro and our university.”

The husband and wife performance duo wanted to assist with the festival as soon as they heard of the shooting last December.

On Dec. 14, 2012, Adam Lanza fatally shot 20 students and six adult staff members at Sandy Hook Elementary School before taking his own life, creating the biggest tragedy since The Virginia Tech Massacre in 2007.

Their efforts were heard this year as Terry Sagedy, director of the festival and GSU alumnus, arranged for the Elaris Duo to perform.

Having the Elishas perform was fate, Sagedy said.

“This is the second year that the festival has taken place.” Sagedy said “In light of the tragic incident that happened in our community, we’ve planned eight days of art, music and joy that offers something for everyone”

Larisa Elisha hopes to bring smiles to the children’s faces through the interactive performance.

The pieces that the duo will perform range from artists like American composer Kodaly to classical Mozart.

After their Wednesday performance, the Elaris Duo will move throughout the Newtown community to teach master classes and perform for different schools.

The list of performance events will be held at different locations because of the visitation restriction now implemented in the Newtown school system.

Steven Elisha said, “By bringing beauty and some relief, we feel fortunate that we can be a part of the process.”