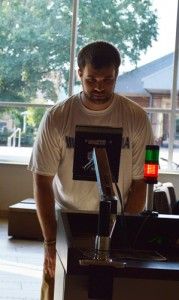 Lakeside and Main Dining Commons now have up and coming technology to best aid its students. One of these being the new Eye Camera System.Photo by: Brandon Warnock

The use of new technology at Georgia Southern University is working to improve student life and one of the newest products is the IRIS Camera System at Main and Lakeside Dining Commons.

“The IRIS camera searches two hundred and fifty data points to search against records quickly.  It happens in only a second or two,” Richard Wynn, director of Eagle Card Program, said.

This is the first semester the IRIS camera technology is being used on campus, although similar biometrics like fingerprint scanners are being used in the Recreation Activity Center.

The large number of data points leads to a very miniscule percent of false positives, which made it a good option for GSU dining facilities, Wynn said.

“The IRIS Camera System uses a biometric device that digitizes a photograph of your eyes at an access point in order to gain entrance into a facility or area of a building,” according to the Eagle Dining website.

The IRIS camera is about the size of an electronic signature pad found at a store like Wal-Mart but has a screen across the front instead of numbers.  On top, there is a small horizontal mirror that students use to line their eyes up.

In the near future, turnstiles will be added to the entrance that will open once a student’s iris’ are verified.  The turnstiles were ordered about six months ago but the manufacturer was not able to have them sent in time, Wynn said.

The IRIS Camera System is composed of two parts, enrollment and recognition.

During enrollment, the student lines up an orange dot on the mirror in-between their eyes and two pictures are taken.  Those pictures are used to create a number series to be compared to later when the student enters the dining commons.

When entering either the Dining Commons or Lakeside, the student goes through recognition where they again line their eyes up in the mirror.  The system then runs the number series through the database to match the student.

Some students were worried that the IRIS cameras would take and save a picture of their eyes that could be duplicated outside of the University.

“One thing I can tell people is I can’t take (their eye picture).  It becomes digitized as a series of numbers and can’t be used to make the picture,” Wynn said.

Eventually, Wynn would like to see the entire student body registered in the system and possibly expand it to being used, for example, instead of a football ticket.

Students using the IRIS camera at the Main Dining Commons have been pleased with how this new technology has been performing, while others have noticed user related issues.

“It’s really cool and you get through as fast as possible.  Once I had to go to the people that work it but they said to go back and try again and it worked.  I think it’s working well overall,” Daniel Ekere, freshman biology major, said.

“Sometimes it’ll say ‘Eyes not recognized’ but if you just try again it works,” Justin Hewitt, freshman business management major, said.  “It’s really about who is using it and if they know how to adjust it.”

Other students do admit that the system has been effective so far, but that it is also unusual.

“I think they’re really cool, but creepy at the same time because the university has my eye on file somewhere,” Emily Hernandez, freshman early childhood education major, said.

The RAC has been using biometric technology since 2008 and has had issues in the past with performance, but has now worked out the largest problems.

“Students had the perception that it doesn’t work and it wasn’t working properly about a year and a half ago.  Around that time there was a software update for the scanning technology, RucTrac, which came with a host of issues,” Jason Schmidt, facility coordinator for physical operations, said.

“We’re at a point now where they don’t have any issues and if issues do come up, it’s something we can easily respond to,” Schmidt said.

The fingerprint scanner technology uses the finger scan to create a number series based on the differences in each fingerprint, Schmidt said.

Much like the IRIS Camera System, the fingerprint scanner cannot be used to actually recreate the finger pattern.

Schmidt said, “It doesn’t actually save an image so I couldn’t replicate a person’s fingerprint.”