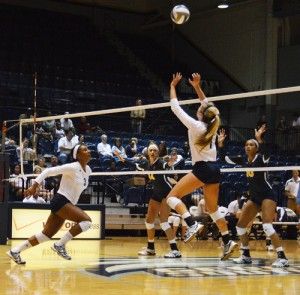 In the second game of the weekend the Georgia Southern University volleyball team defeated the University of North Carolina at Greensboro at home 3-2.

GSU was able to win the first and third game, but failed to put away UNCG in game four. This sent the Eagles into their first five game match of the season and they showed off their stamina winning the final game 15-10.

The entire match was a back and forth from both teams. Senior Nicole Jeschelnik described the court as busy, after recording 16 kills and 14 digs.

Head coach Dustin Wood appreciated the long match. “I’m happy they pulled that through, we needed a test,” Wood said.

The Eagles take on The Citadel this Tuesday at 6 p.m. in Hanner Fieldhouse.