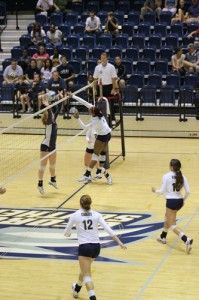 The Georgia Southern University volleyball team dominated at the Jaguar Invitational and finished the opening weekend 3-0.

It was the season opener for both teams and the coaching debut for new head coach Dustin Wood.

Redshirt junior outside hitter Naomi Wells led TSU with nine kills, and freshman middle Shuantia Carr had six kills, but the Eagles held the Tigers to a .057 hitting percentage.

The Eagles never trailed in the second set but found themselves behind in the third. However, behind a 15-2 spurt the Eagles took back control of the set.

The Eagles won the first set, but trailed in the second, which allowed South Alabama to tie the match at 1-1. GSU regained control in the third with a 25- 16 win and a 25-23 win in the fourth.

The Eagles held the Tigers to a .026 hitting percentage while they hit .294 as a team.

DeRatt was named Most Valuable Player of the tournament posting 14 kills and 15 digs in the final match versus South Alabama.