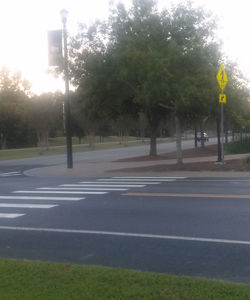 The number of on-campus accidents has been rising and Public Safety urges students to be aware of their surrounding while progressing through campus.

“It’s all about awareness whether you’re in a car, a bike lane or as a pedestrian,” Chief Michael Russell, director of public safety, said.

An accident occurred Monday, Sept. 9, when a bicyclist was struck in the bike lane on Connector Road.

“Sometimes we see traffic backed up there and there is another [bike] lane there. As long as that lane is free, it belongs to a bicyclist. You can’t take that right away from him or her,” Russell said.

The biker involved in the accident near Forest Drive assumed an oncoming car was stopping and in veering off to avoid being hit by the first car, the bicyclist hit another car, Russell said.

Thursday, Aug. 29, Ogonna Ifeadike, senior biology pre-med major, was in a crosswalk outside the Biological Sciences Building and was struck by a vehicle.

Ifeadike said she assumed the driver was a friend and would stop close to talk to her. However, when the car did not stop she was hit.

“I think the driver was almost as shook up as the pedestrian and a lot of time that is the case,” Russell said. “The driver was ticketed, but they’re accidents and that’s why we call them accidents.”

University Police want students to understand correct traffic laws and be conscious when walking, biking or driving on GSU’s campus.

Bikes should not be on the pedestrium or sidewalks because bikes are treated as vehicles, Russell said.

“Sidewalks are for people on foot,” Russell said.

Cyclists have the same rights in a lane as a car, according to Georgia traffic laws.

“New crosswalks were painted before the semester started in order to prepare for the anticipated traffic to come in this fall semester,” Russell said.

The new crosswalks were painted outside the Biological Sciences Building and at the end of Greek Row crossing Forest Drive.

GSU should consider the same type of crosswalk the city of Statesboro has on Lanier Drive by Cambridge at Southern because some areas of campus can be just as busy as areas near apartment complexes, Ifeadike said.

There is not enough of a demand for the light up crosswalks on campus at this time, Russell said.

A specific place Russell wants student to be most aware of is around Greek Row where there is a curve in the road.

“This curve is dangerous especially for students who do not use the new crosswalk,” Russell said. “They are in the road longer and they walk in a diagonal rather than the straight crosswalk with the shortest distance.”

The campus-wide speed limit is 25 miles per hour, which is still fast when there are a lot of people crossing roads, Russell said.

Russell said, “This campus is known as a walking campus and streets that did not see much traffic in years past are now seeing more traffic due to our campus expansion.”