GSU aims for first win of the season 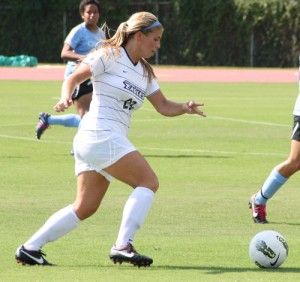 After dropping its first three games of the regular season, the Georgia Southern University women’s soccer team (0-3) has the opportunity to bounce back in its first game at Eagle Field as they take on the Stetson University Hatters (1-1-1).

These two teams are similar, each having managed to score only once in three games, however it’s the Hatters who have a better record and a consistent defense. The Hatters are coming off their first loss of the season, a loss they suffered at home. The matchup against GSU will be the first away game of the season for the Hatters.

So far this season SU has managed to score only two goals on 40 shot attempts. Conversely, the Hatters have held their opponents to three goals on 37 shot attempts.

GSU’s offense has only made one shot on 16 attempts on the season, while they have given up an average of 3.67 goals per game. GSU has also taken 36 less shot attempts than its opponents this season.

The Eagles’ defense is a work in progress, as they give up a shot on goal percentage of .558 and allow their opponents to get off 17.3 shots per game.

Having not seen any action her freshman year, sophomore goalie Heather Kirkover has tried to hold down the fort for GSU’s defense. Kirkover has 18 saves this season to go along with a save percentage of .621.

Senior goalkeeper Victoria Troccoli, in comparison to Kirkover, has less saves with 10, but produces a better save percentage at .769.