Eagles split over the weekend 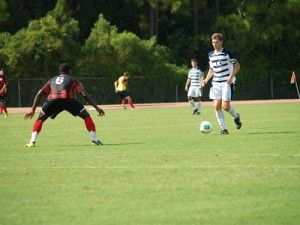 Senior midfielder Hunter Norton (13) sizes up a defender. The Eagles went 1-1 over the weekend and failed to climb over the .500 mark.Photo by: Jessica Stanfield

Georgia Southern University men’s soccer team finished up its road weekend with a 1-1 split in the two games that were played in the Mercer Tournament.

The Eagles got off to a good start with a 3-0 thrashing against the Stetson University Hatters in the first game of the tournament on Friday.

GSU was able to get ahead early in the game as it found the first goal by way of a pass from senior forward Witt Carlisle to sophomore Eric Dinka in the 10th minute.

This goal pushed GSU to an advantage to which the Hatters could not come back.

Sophomore forward Emmanuel Raji recorded his first goal of the year in the closing minutes of the first half from a cross from junior midfielder David Vargas Masis, who received his first point of the year from assisting Raji, this pushed the Eagles up 2-0.

Preseason All-SoCon selection senior midfielder Hunter Norton put the dagger in SU’s heart with a goal in the 74th minute off a free kick from 20 yards out. This would be the final tally of the night as the Eagles would hold the Hatters offense to just five shots on goal, all of which senior goalkeeper Nick Bates saved.

The Eagles were looking to continue their win streak and finish the weekend on a high note when they took on winless Mercer University, however GSU came up on the wrong end of a very physical game that eventually led to the sending off of Eagle senior defender Nick Lane.

The score-line was not the statistic of note in this game, rather the five bookings, four of which were yellow, played a huge part into the game.

Playing down a man for the last half-hour of the game, GSU relied heavily on its defense and senior goalkeeper Neal Bates to keep it in the game.

Bates came up big with 11 saves for the night, however, the Eagles were overmatched due to the man down and allowed a goal in the latter parts of the game. Mercer senior forward Ehjayson Henry put the game out of reach as the Bears won 1-0.

GSU fell to 2-3 on the season and will face off against Radford University (1-2-1) in the final stretch of a five game road trip this Friday at 1 p.m.