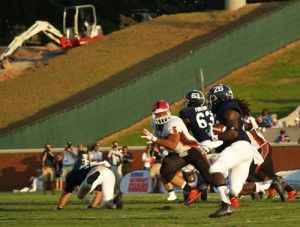 GSU defeated SFU 59-17 in its second game of the season.Photo by: Brandon Warnock

The Georgia Southern University Eagles turned in its second straight high scoring performance with a 59-17 win over St. Francis University.

Redshirt freshman quarterback Kevin Ellison helped get the Eagles in range for a 38 yard field goal by freshman kicker Younghoe Koo to start the fourth quarter.

Redshirt freshman quarterback Vegas Harley would take over for Ellison on the next drive and lead GSU on another field goal drive.  GSU was comfortably ahead 59-10

SFU scored on a 65 yard drive that used five plays to push the final score to 59-17.

A quick strike right out of the locker room by Georgia Southern University gave the team a 34-7 lead early in the third quarter.

GSU senior running back William Banks broke loose up the middle for a 46 yard touchdown run.

The touchdown pass put GSU ahead 41-7.  On the ensuing kickoff a special teams blunder by SFU ended with a safety for GSU. The Eagles added a field goal to go up 46-7.

Redshirt freshman quarterback Kevin Ellison sparked a 74 yard drive with his passing ability, and Banks found the end zone for the third time to cap it off.

It took Georgia Southern University only five plays to move the ball 80 yards to the end zone and make the score 20-0 early in the second quarter.

SFU redshirt freshman Max Ward kept a drive alive for his team with a key third down scramble.  Later in the drive Ward completed a pass to put SFU on the two yard line.

SFU sophomore running back Khairi Dickson dove over the top to put the Red Flash on the board 20-7.   The drive lasted 16 plays and took more than seven minutes off the clock.

On the next drive, GSU redshirt freshman quarterback Kevin Ellison came into the game with under 30 seconds left and completed a 41 yard pass to sophomore wide receiver B.J. Johnson.

The pass set up a short touchdown run for senior running back Johnathan Bryant and put GSU ahead 27-7.

Neither team had found an offensive rhythm midway through the first quarter thanks to some self-inflicted mistakes.  Senior running back William Banks fumbled to kill a GSU drive but junior offensive tackle Garrett Frye recovered the ball to avoid a GSU turnover.

Penalties kept SFU from capitalizing on its most promising drive of the first quarter.  With the scored knotted at zero, GSU redshirt senior running back Torrance Hunt took a pitch around the right side for a 46 yard touchdown.

GSU followed up with a solid drive set up by a 26 yard punt return by senior running back Johnathan Bryant.  The longest punt return of the season for GSU was punctuated with 15 yard touchdown by Banks.