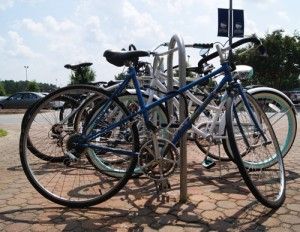 Bike racks are provided for students who choose cycling as their mode of transportation to and from classes.Photo by: Heather Yeomans

Georgia Southern University is a bike-friendly campus to students that own their own bicycles and rent them.

Students that want to ride bicycles to class, but do not have their own, can rent bikes from the RAC.

Campus Cycle is an organization on campus that allows students to rent recycled bicycles for a fee of $30.

“From what I have seen and what heard from my staff, it does seem like there are a lot of people biking on campus,” Jenn Velie, Southern Adventures program director, said.

There many students who use this method of transportation on campus, Velie said.

With the amount of people biking on campus, pedestrians and other hazards are being noticed.

“It doesn’t seem there is a great area to bike on campus,” Velie said.

Student cyclists have noticed the issues of biking in a crowd of pedestrians.

Nick Shaffer, mechanical engineering major, believes that pedestrians can be a danger to bikers on campus.

People are not the only problem, however, students who bike on campus also have to deal with car traffic around campus.

“Over by fraternity row some of the crosswalks in that region are not safe because nobody pays attentions to you,” Barker said.

Berson says that one of the main dangers for bikers is student-driven cars.

The intersection in front of the engineering building is another dangerous location for bikers, Berson said.

Many pedestrians to do not see cyclists as a real danger.

Katie Wakefield, biology graduate student, believes that the cyclists are attentive while on campus.

Terri Scott, senior economics major, also believes that cyclists on campus are safe when it comes to riding near pedestrians but has some concerns about the cyclists’ safety.

“I kind of just wish that sometimes there was a more separate bike lane for them so that they’re not ditching and dodging pedestrians,” Scott said.

Velie is happy that GSU has biking lanes, but thinks there always could be more.

“There are some campuses that don’t have [bike lanes],” Velie said. “So I do think it is beneficial we do have some.”