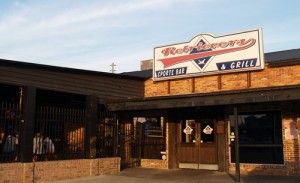 Retrievers Sports Bar and Grill is now accepting Eagle Express to purchase food. They are open until 1 a.m.Photo by: Brandon Warnock

This fall’s annual Block Party will be held at The University Plaza Saturday with gates opening at 5 p.m.

The Block Party is a once a semester mini-music festival that started in 2010 on Cinco de Mayo as a way to bring another social event to students.

“We wanted to do a big event and what it came down to is what could we do to make coming out here different, more entertaining and change the experience,” Nathan Queen, co-owner of Retrievers and one of the coordinators for Block Party, said.

“I love seeing people come into the bars they might not normally go to, enjoy the vibe and then become regulars. It brings the bars together in a very welcoming atmosphere,” Anna Lee Zealy, bartender at Rum Runner’s, said.

The event will feature musical artists Trea Landon, Jason Lamson, Rob Pennigton and 2012 Music Row Independent Artist of the Year, Eric Lee Beddingfield. The artists will perform in that order.

Trea Landon, a familiar country musician in the Statesboro music scene, will open the party on the main stage at 5 p.m.

“He, until recently, was a Georgia Southern student but left to pursue his music and was recently signed to Broadcast Music, Inc.,” Queen said.

Robert Pennington, a local Statesboro musician who has opened for Cole Swindell on the “Bring the Beat Back South Tour” and at Swindell’s label showcase will also be performing at the event.

“I’m looking forward to the atmosphere. People tend to get excited if something is new or is changed.” Pennington said, “The power in a song can brighten someone’s day and put a smile on their face, that’s what I love most about playing music.”

Headlining the Block Party is country singer Eric Lee Beddingfield. A Georgia Southern graduate who pursued his musical ambitions after a career-ending injury while playing football at GSU and has recently signed onto Reverb Nation.

“Beddingfield is Georgia Southern all the way through, he played football here, he and his wife met here,” Queen said.

Tickets can be purchased from employees of Retrievers Sports Bar & Grill, Rum Runners and Rude Rudy’s for $10 or if there are still tickets available, the day of for $15.

The coordinators hope to bring rock and other types of musicians to future events.

“Not everyone likes country or rap but there are twenty-two thousand students here, and we want to give everyone a chance to be able to come and hang out all day,” Queen said.

“From spectators it’s a blast. You pay a flat ten dollar fee to get in three bars all night, step out in the parking lot and watch the DJ or artist, and there are drink specials all night,” Zealy said, “It’s a giant party.”