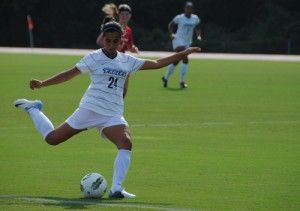 The GSU women's soccer team is set to play its first game of the season against the Indiana State University Sycamores tomorrow.File Photo

In the 30th minute, freshman forward Jennifer Wittick received a pass from sophomore forward Abria Allen and recorded what would have been her first career goal to put the Eagles up 1-0.

The Eagles carried the 1-0 lead into halftime and held a 3-0 edge in shots on goal. They looked to continue the momentum in the second half, but thunderstorms moved in and rendered the field unplayable.

There was still an entire half left to play, but head coach Brian Dunleavy was pleased with how the game was unfolding for his team.

“It would be unfair to High Point to say we were going to win the game, but things were looking pretty good for us, so it’s unfortunate that we couldn’t finish it out,” Dunleavy said in a news release.

There will be no make-up game scheduled between the teams.

Although Sunday’s game was canceled, the Eagles were able to complete their game against North Carolina State University on Friday.

Unfortunately for the Eagles, NCSU’s constant offensive attack and stifling defense proved to be too much as they were shut out 4-0.

GSU’s defense struggled to contain freshman forward Jackie Stengel, who registered two goals (27’, 42’) and added one assist in the 63rd minute for NCSU.

NCSU sophomore forward Brittany Stanko was the recipient of Stengel’s assist in the 63rd minute when her shot went over the outstretched arms of sophomore goalkeeper Heather Kirkover. Stanko also tallied an assist in the game.

Sophomore forward Nora El-Shami the only Eagle capable of generating any pressure with a team-high three shots, one of which was on goal.

After the game, Dunleavy was able to pinpoint the areas the Eagles must improve upon in order to obtain better results as the season progresses.

“We need to improve in our play in the attacking third and do a better job of clearing balls in our defensive third,” Dunleavy said in a news release. “We need to look at the positives from this game and address the negatives.”

After embarking on a four-game road trip to start the season, the Eagles will now return home to Eagle Field for three straight games, beginning against Stetson University on Friday at 7 p.m.