RAC named one of the top 10 college gyms in America 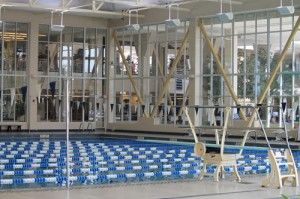 The competition swimming pool is one of the many features included within the RAC.Photo by: Ryan Woodham

The list was based on a criterion of equipment availability and quality, facility uniqueness and classes and physical education programs offered.

The article referenced the GSU’s Show of Strength and the Strongest Eagle competitions in reference to the level of programming offered by the RAC.

Many of the center’s amenities, including, but not limited to, the weight room, the five basketball courts and competition pool were all mentioned in praise.

The RAC earned another distinction, as only half of the list is comprised of facilities open to the entire student population, with the other half occupied by athletic training centers, used exclusively by student athletes.

America Minc, director of Campus Recreation and Intramurals, said, “For our facility to be named among those athletic training facilities is an honor.”