‘We had a chance to win’: Georgia Southern keeps No. 23 Auburn close, but falls 83-74 in season opener 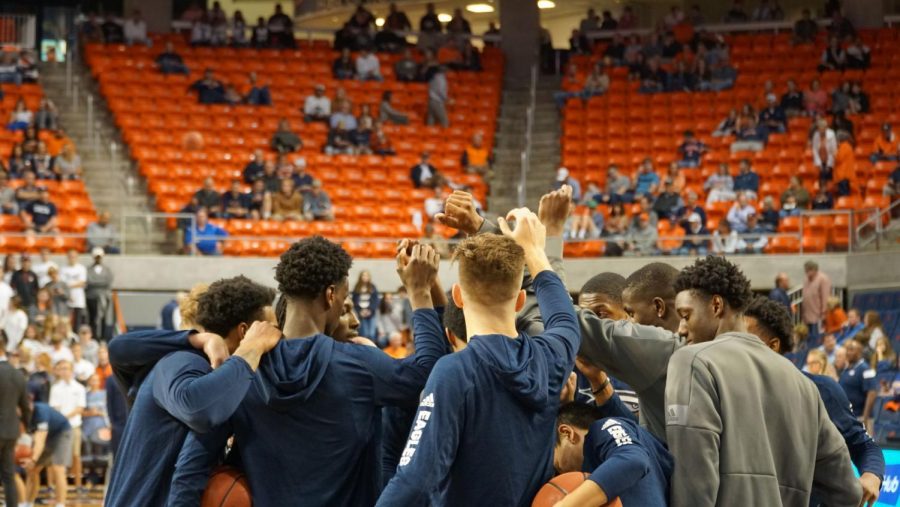 At 0-1, Georgia Southern will host Reinhardt Friday in Hanner Fieldhouse.

The captain broke down the pregame huddle and then stood in line with his teammates, some of which were sophomores in high school when his college career started, and waited for the 2019 season to begin.

Just 20 seconds into the game, Smith scored the first points on a layup created by his own steal. The aggressive nature he played with set him up for a 16 point night and warranted special attention from a No. 23 Auburn program who was last seen in the Final Four.

“Coach [Mark Byington] gets on me about getting aggressive,” Smith said “Out there, I saw some things open up so I just decided to stay aggressive and take advantage.”

It wasn’t Smith alone that kept Georgia Southern in the season opener, as two other Eagles hit double digits, but it was his presence that was the leading force.

“He looked great, especially early on,” Byington said. “The first 10 minutes he was the best player on the court. We’re going to lean on him a lot this year.”

“It felt great playing a Top 25 team and having a good performance,” Smith said. “It’s really encouraging moving on to the rest of the season. That’s a really well coached team so moving forward we just need to fix some things.”

Though he sat out most of the 2018-19 season with a back injury, Smith drove often and with purpose, which sent him to the line three times. Each foul he took sent him to the floor. He got back up each time and went 3-for-6 from the free throw line.

“Body [is] feeling good,” he said. “Tomorrow we have another practice so I know I have to do some little things to keep my body right, stretching and rolling out.”

Isaiah Crawley was the other member who gave the home team a scare, finishing with 16 points, six rebounds and two dunks that silenced an Auburn Arena of 8,702. The former Columbia State forward provided some size for GS in absence of Simeon Carter.

The team announced just before the game that Carter was suspended indefinitely for violation of team rules.

Crawley took ownership of being a captain and held his own for much of the night against a team that was noticeably oversized.

“We knew we were going to have to come in here and play,” he said. “We knew the crowd was going to be involved, so we had the mindset that we had to come in and play well.”

GS had control for much of the first half, but momentum swung to the home team just before halftime.

Down 37-35 with 1:37 on the clock, Auburn’s Devan Cambridge stepped off a pick and drained a confident three to take the lead. Crawley missed the ensuing jumper.

The next possession, Cambridge took another three to take a four point lead to the locker room.

“It was a high-level game for an opening night game,” Byington said. “We went toe to toe with a Top 25 team for the most part. I know our guys have some regrets and I do too because I feel like we left some plays out there that would’ve given us a good chance to win the game.”

That last series before half was one of the plays GS will have to look back on in the coming days. The Eagles will also look at the 18 turnovers committed and going 5-for-18 from beyond the arc.

They’ll look at the 41 rebounds allowed and the 22 points allowed off of turnovers.

But Byington and his quad will also look at the positives, and knowing they were never truly out of a season opening game against a Final Four team.

“We had a chance to win, but we can play much better,” Byington said. “I thought the guys who came off the bench all made some good plays. They’ll keep getting experience and getting better and better. We’ll get Simeon Carter back at some point and a couple of other guys will come back from injuries. We’ll be deeper and be able to keep going and playing faster like I want us to.”