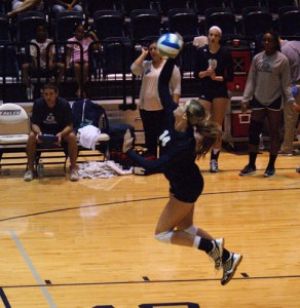 Sophomore middle Crysten Curry totaled 16 kills and 22 blocks in the final match and was named MVP of the invitational.  Sophomore defensive specialist Alexandra Beecher and sophomore right side Katie Bange were named to the all-tournament team.  Beecher had 49 digs in three matches and Bange had 32 kills and 12 blocks.

The third set against Oral Roberts was tied 22-22 when junior outside hitter Jamie DeRatt got two straight kills and Bange finished the set with a kill to bring the match to 2-1 in the Eagles favor.

“We just came together and we were aggressive, it really changed the pace of the game,” DeRatt said.

“When our passing is on we’re, I guess you can say, unstoppable. No one can stop our offense,” senior outside hitter Nicole Jeschelnik s  aid.

“We executed our game plan very well,” GSU head cc c oach Dustin Wood said in a news release. “We were undisciplined at times, but overall, it was a good back-row effort. A lot of scrappiness from both sides made it a fun match to watch.”

DeRatt led the Eagles with 13 kills and 10 digs, junior middle Kym Coley had nine kills for the Eagles and Bange had seven.

The Eagles are set to host the Bash in the Boro this upcoming weekend where they will play three matches against the Central Michigan University Chippewas, the Jackson State University Tigers and the Charleston Southern University Buccaneers.

“We love home matches, we love our fans, we love playing in our home gym, and the atmosphere is great,” DeRatt said.

The Eagles first match of the tournament will be against the Chippewas on Friday at 7 p.m. in Hanner Fieldhouse.