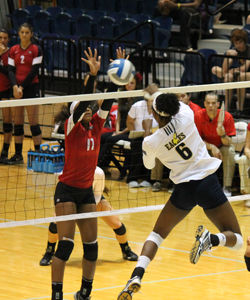 GSU is set to host and play in this weekend's Springhill Suites Invitational.File photo by: Ryan Woodham

The Panthers have an overall record of 2-4 after tournaments at Cleveland State University and South Carolina University.

Sophomore defensive specialist Annemarie Chin, who is seventh in the Big South Conference, posted 5.44 digs per set including match-highs of 19 digs against Cleveland State and 20 digs against Indiana University- Purdue University Fort Wayne.

The Bison have an overall record of 0-6 after dropping two matches to Wisconsin University 3-1 and Northern Iowa University 3-0 this past weekend in the Doublewood Inn Classic.

Freshmen middle back Emily Miron received all-tournament team honors and led the Bison this past weekend in kills.

The Golden Eagles have an overall record of 6-1 after three victories last weekend against Southern Texas University 3-0, the University of Texas at El Paso 3-1 and the Texas Southern University Jaguars 3-0.

Senior Bruna Silva, of ORU, was named Southland Conference defensive player of the week and led ORU this past weekend averaging 5.53 digs per set.

Georgia Southern University’s volleyball team has an overall record of 6-2 after its 3-0 (18-25, 14-25, 13-25) loss at its first home game of the season against the University of Georgia on Tuesday.

After the second set, junior outside hitter Jamie DeRatt and junior middle Kym Coley combined to tally 14 kills, seven each, and sophomore setter Katilin Minnerly led GSU in assists with 16.

“We played flat, we didn’t play our best,” Minnerly said. “Our energy level was really low this game it just wasn’t there, but I think that if we had our energy we would have been right there with them.”

“We’re excited about the Invitational,” Coley said. “We have our first opportunity to have our first home tournament, I just want to forget about this match and just think [about] the future.”

The Eagles will start off playing against the Panthers on Friday at 5 p.m. and will play NDSU and Oral Roberts on Saturday at 12 p.m. and 7 p.m.