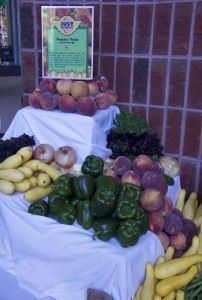 Lakeside Dining Commons hosted its first ever ‘Just Peachy’ event today with the main dinner being held from 6 to 8 p.m. at the Tilted Skillet.

‘Just Peachy’ was inspired by a desire to have an event centered around the state of Georgia, its culture, the popular food items of the state, and the south.

“We have to do something that we can showcase to international students that might not understand why we do a lot of things or the out-of-state students that never really got into the Georgia scene or never really tried peaches that much. We wanted to do something that really identifies with Georgia,” Michael Murphy, marketing coordinator of Eagle Dining Services, said.

The reason behind the creation of the event was that every year NACUFS (National Association of College and University Food Service) ranks events done by schools and hands out awards for those events.

“As we try to progress and become more of a nationally recognized program, one thing we had to do was develop a strategy towards producing some of these events,” Murphy said.

Murphy and many of the other leaders in Eagle Dining Services came together and thought of six events for each semester, with ‘Just Peachy’ being the second event of the semester.

The menu for the event consisted of a variety of peach infused foods thought of by Chef Brian Hancock and his team with recipes including: Peach BBQ Pizza, chorizo dogs with peach chutney, but for dinner there was grilled watermelon steaks and pecan-crusted pork tenderloin.

“I think it was a good experience, just introducing new ways to eat stuff, like there was a peach pizza with balsamic vinaigrette on it and it introduced peach crème brûlée, people normally wouldn’t eat that kind of stuff but its featured here so they are more likely to try different things,” Margaret Turner, freshman nutrition and exercise science major, said.

“I just like trying something new, and I didn’t expect to like a lot of the food that I tried because they were a lot of funky combinations but when you ate it together it really did work,” Jennifer Shaffer, freshman mechanical engineer major, said.

Some of the favorite peach items offered at the event were the ‘Just Peachy’ drink mix ‘Watermelon Chillers’ which was a mixture of ginger ale and watermelon juice and the peach and cream desert.

Along with the food there was also be free giveaways of items including a cookbook consisting of some of the menu items from the day.

The event was favorable and students said that they would look to come back next year if it was offered.