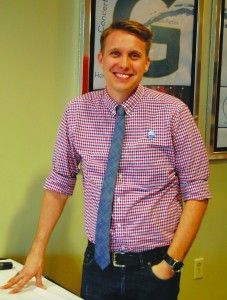 Tonight in the Russell Union theater film “Linotype: The Film” was played and the director of the film, Douglas Wilson, answered all of the audiences questions.

“I found this old letter press equipment shoved in a corner of the graphic design floor and asked my teacher what it was,” Wilson said, “Throughout my years at Missouri State and what became my senior thesis project, I taught myself letter press printing and I visited Tim Tower to see his letter press equipment. He asked me if I had seen this and it was a Linotype machine and it was love at first sight.”

A linotype is a type of line casting machine used in printing that was introduced in 1886. The machine was the prototype for the evolution of faster and more efficient printing.

“It took news that was week old in most small towns and now they got day old news,” Wilson said.

“I was surprised that the film was so interesting. I thought this documentary would be boring but it was interesting learning about one of the most influential machines in printing history,” Micaiah Sanders, senior public relations major, said.

The documentary not only described what a linotype was but documented the history of the machine and its importance to the evolution of news, books, printing, and script.

The producers were not certain about the movie’s success, but after talking to people that were influential in the development of the machine, they found that this documentary was imperative for people to see and understand why this machine was important.

“The most important thing was telling the story of the linotype and the linotype operators.  This wasn’t just a job for them, this was a calling for them,” Wilson said, “To me, just to honor and tell their story was what I was most excited about.”